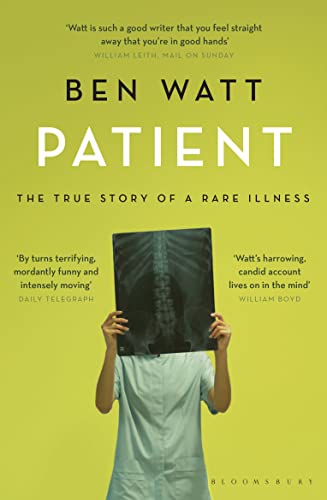 Patient: The True Story of a Rare Illness by Ben Watt

In 1992, Ben Watt, a member of the band Everything But The Girl, contracted a rare life-threatening illness that baffled doctors and required months of hospital treatment and operations. This is the story of his fight for survival and the effect it had on him and those nearest him. 'In the summer of 1992, on the eve of a trip to America, I was taken to a London hospital with bad chest pain and stomach pains. They kept me in for two and half months. I fell very ill - about as ill it is possible to be without actually dying - confronting a disease hardly anyone, not even some doctors, had heard of. People ask what was it like, and I say yes, of course it was dramatic and graphic and all that stuff, but at times it was just kind of comic and strange. It was, I suppose, my life-changing story.'

An astonishingly assured anatomy of his ordeal, by turns terrifying, mordantly funny and intensely moving. Many people suffer the pain and indignities of intensive medical treatment; but few have written about it with quite such alarming vividness or clarity -- Mick Brown * Daily Telegraph *
Watt is made of particularly fine stuff, possessed of a shining intelligence that allowed him to transcend his horrible circumstances. I cannot think of any book that so clearly describes the gap between sickness and health, the greatest gap that exists between human beings -- Penny Perrick * The Times *
A vivid account of what it's like to be terribly ill. The details of Watt's hospitalization are brilliantly recollected, and he writes with a songwriter's eye for the telling phrase -- Robert McCrum * Observer *
This is not so much for the music lover as for lovers of life -- Andrew Smith * The Times *
Five minutes after beginning Patient I knew I was going to be all right. Watt is such a responsible, deft writer that you feel straightaway you're in good hands. He doesn't want your sympathy - he wants to tell you something about the world. He makes you laugh. The thing is you can read this and not feel sorry for him. That's his achievement -- William Leith * Mail on Sunday *
As gripping as an airport novel and as gruelling as a horror story -- Martin Aston * Q Magazine *
Quiet elegance and ringing epiphanic lyricism. Watt's writing shares these qualities and his book is a nearly flawless telling of his unexpected and drawn-out battle with an extremely rare - and nearly fatal - illness * New Yorker *
Ben Watt's harrowing, candid account of his near death from one of the world's rarest diseases lives on in the mind - a fine testimonial to his fortitude, his powers as a writer and the NHS. * William Boyd, Sunday Times *

Born in 1962, Ben Watt is a musician, songwriter, DJ and author. His first book, Patient: The True Story of a Rare Illness was a New York Times Notable Book of the Year, voted a Sunday Times Book of the Year by William Boyd and shortlisted for the Esquire Non-fiction Book of the Year. He is perhaps most well known for his twenty-year career in alt-pop duo Everything But The Girl (1982-2002). He is also an international club and radio DJ, and since 2003 has run his own independent record labels Buzzin' Fly and Strange Feeling. Having recently returned to songwriting and live performance, his first solo album for thirty years is expected in 2014. He lives in north London with his wife Tracey Thorn and their three children.

GOR005702105
Patient: The True Story of a Rare Illness by Ben Watt
Ben Watt
Used - Very Good
Paperback
Bloomsbury Publishing PLC
2014-02-13
192
1408846608
9781408846605
N/A
Book picture is for illustrative purposes only, actual binding, cover or edition may vary.
This is a used book - there is no escaping the fact it has been read by someone else and it will show signs of wear and previous use. Overall we expect it to be in very good condition, but if you are not entirely satisfied please get in touch with us.