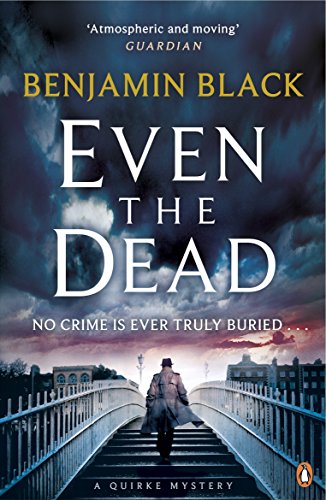 Even the Dead
by Benjamin Black

In Stock
£3.99
Pathologist Quirke works in the city morgue, watching over Dublin's dead. The latest to join their ghostly ranks is a suicide. But something doesn't add up. The victim has a suspicious head wound, and the only witness has vanished, every trace of her wiped away.
Very Good Good
7 in stock

Even the Dead Summary

Even the Dead: A Quirke Mystery by Benjamin Black

NO CRIME IS EVER TRULY BURIED...

Visceral, gritty and cinematic, Even the Dead is the latest stylish thriller from John Banville's crime-writing alter ego, Benjamin Black.

Pathologist Quirke works in the city morgue, watching over Dublin's dead. The latest to join their ghostly ranks is a suicide. But something doesn't add up. The victim has a suspicious head wound, and the only witness has vanished, every trace of her wiped away.

On the trail of the missing woman, Quirke finds himself drawn into the shadowy world of Dublin's elite - secret societies, High Church politics and corrupt politicians. It leads him to a long-buried conspiracy that involves his own family. But it's too late to go back now...

THE DEAD WILL BE HEARD

Even the Dead Reviews

Quirke is an endearing hero and the Dublin of the 1950s - wet, cold, foggy, sinister - is evoked with harsh realism and nostalgia * The Times *
Addiction, morbid sexual obsession, blackmail and murder, as well as prose as crisp as a winter's morning by the Liffey . . . Quirke is human enough to swell the hardest of hearts * GQ *
With Quirke, Banville has made a fascinating addition to the ranks of the defective detective in books that combine respectful reading of the genre with brightly original writing * Guardian *
A requiem for a cursed city, its inhabitants' inner lives doomed to remain as locked away, unhappy and unknowable as whatever lies buried * Metro *
It is doubtful that anyone can write as well as Benjamin Black when it comes to a psychological mystery * Washington Times *
Even the Dead offers pleasures one doesn't always associate with the crime thriller. Like subtle characterisation and a calm, elegant prose style. What makes the novel stand out is the warm, sensitive, psychologically acute characterisation. When I reached the end of the novel, I had a sense of having been nourished, rather than manipulated. It just goes to show that it isn't the genre that counts, but the talent that a writer brings to it * Independent on Sunday *
In Even the Dead, Black goes beyond the atmospheric stage and scene setting, delving deeper than in any previous novel into the soul of his pathologist hero Quirke, an enigmatic loner whose voice colours every page as if staining it with nicotine * Sunday Herald *

Benjamin Black is the pen name of acclaimed author John Banville, who was born in Wexford, Ireland, in 1945. He is the author of fifteen novels, including The Sea, which won the 2005 Man Booker Prize. In 2013 he was awarded the Irish PEN Award for Outstanding Achievement in Irish Literature, and in 2014 the Quirke novels were adapted into a major BBC TV series. This is the seventh book in the acclaimed Quirke series.

GOR007269812
Even the Dead: A Quirke Mystery by Benjamin Black
Benjamin Black
Used - Very Good
Paperback
Penguin Books Ltd
2016-01-28
272
024119735X
9780241197356
N/A
Book picture is for illustrative purposes only, actual binding, cover or edition may vary.
This is a used book - there is no escaping the fact it has been read by someone else and it will show signs of wear and previous use. Overall we expect it to be in very good condition, but if you are not entirely satisfied please get in touch with us.