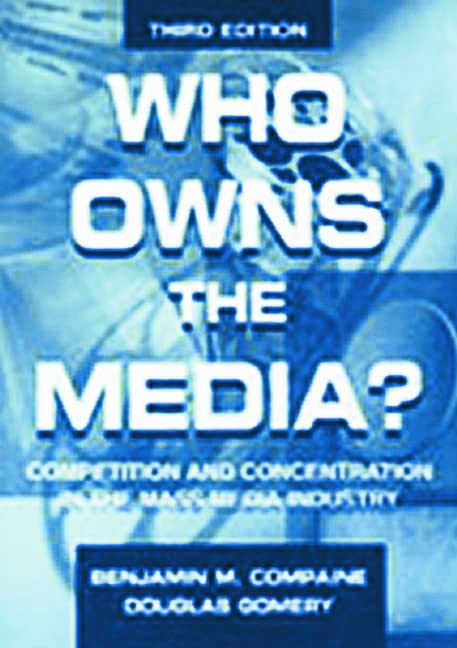 Who Owns the Media?
by Benjamin M. Compaine

In Stock
£6.99
Tackles the question of media ownership. This title chronicles the myriad changes in the media industry and the factors contributing to these changes. It examines how the media industry is being reshaped by technological forces in the various segments, as well as by social and cultural reactions to these forces.
Very Good
Only 1 left

Who Owns the Media? Summary

Who Owns the Media?: Competition and Concentration in the Mass Media industry by Benjamin M. Compaine

This thorough update to Benjamin Compaine's original 1979 benchmark and 1982 revisit of media ownership tackles the question of media ownership, providing a detailed examination of the current state of the media industry. Retaining the wealth of data of the earlier volumes, Compaine and his co-author Douglas Gomery chronicle the myriad changes in the media industry and the factors contributing to these changes. They also examine how the media industry is being reshaped by technological forces in all segments, as well as by social and cultural reactions to these forces.

This third edition of Who Owns the Media? has been reorganized and expanded, reflecting the evolution of the media industry structure. Looking beyond conventional wisdom and expectations, Compaine and Gomery examine the characteristics of competition in the media marketplace, present alternative positions on the meanings of concentration, and ultimately urge readers to draw their own conclusions on an issue that is neither black nor white.

Appropriate for media practitioners and sociologists, historians, and economists studying mass media, this volume can also be used for advanced courses in broadcasting, journalism, mass communication, telecommunications, and media education. As a new benchmark for the current state of media ownership, it is invaluable to anyone needing to understand who controls the media and thus the information and entertainment messages received by media consumers.

GOR009966192
Who Owns the Media?: Competition and Concentration in the Mass Media industry by Benjamin M. Compaine
Benjamin M. Compaine
Routledge Communication Series
Used - Very Good
Paperback
Taylor & Francis Inc
2000-06-01
632
0805829369
9780805829365
N/A
Book picture is for illustrative purposes only, actual binding, cover or edition may vary.
This is a used book - there is no escaping the fact it has been read by someone else and it will show signs of wear and previous use. Overall we expect it to be in very good condition, but if you are not entirely satisfied please get in touch with us.