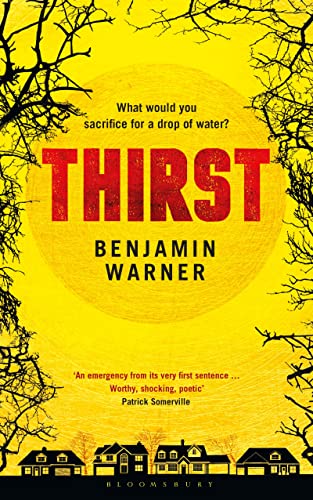 'An emergency from its very first sentence ... A literary thriller that summons the survivalist terror ofThe Road' Patrick Somerville, author of This Bright River On a searing summer Friday, Eddie Chapman has been stuck for hours in a traffic jam. There are accidents along the highway, but ambulances and police are conspicuously absent. When he decides to abandon his car and run home, he sees that the trees along the edge of a stream have been burnt, and the water in the stream bed is gone. Something is very wrong. When he arrives home, the power is out and there is no running water. The pipes everywhere, it seems, have gone dry. Eddie and his wife, Laura, find themselves thrust together with their neighbours while a sense of unease thickens in the stifling night air. Thirst takes place in the immediate aftermath of a mysterious disaster - the Chapmans and their neighbours suffer the effects of the heat, their thirst, and the terrifying realisation that no one may be coming to help. As violence rips through the community, Eddie and Laura are forced to recall secrets from their past and question their present humanity. In crisp and convincing prose, Ben Warner compels readers to do the same. What might you do to survive?

A terrifying thriller ... Visceral * Entertainment Weekly *
A compelling eco-thriller ... Thirst offers a thoroughly unsettling vision of an all-too-believable near future * Mail on Sunday, Thriller of the Week *
Fans of Cormac McCarthy's The Road will find similar end-of-the-world thrills in Thirst by Benjamin Warner ... Claustrophobic, neatly written and gripping * Vogue, 'The Finest New Fiction' *
An emergency from its very first sentence, Thirst is a literary thriller that summons the survivalist terror of The Road and the beautiful, aching humanity of writers like Ursula K. Le Guin and Jose Saramago. It's also a tense, prescient journey into a collective environmental nightmare - one that's not very hard to imagine actually happening. This book tapped into fears I didn't know I had. Warner has given us a worthy, shocking, and poetic debut * Patrick Somerville, author of This Bright River and The Cradle *
An intense post-apocalyptic scenario, which sees fresh water disappearing, and parched people's moral codes draining away just as fast. Warner hones in on the details of survival and how relationships and communities go to the bad in the face of disaster * Psychologies *
Gritty ... Fans of post-Apocalyptic fiction will welcome Benjamin Warner's debut novel. It's a disturbing, enigmatic book ... Visceral ... It excels is in its gut-wrenching descriptions of how dehydration ravages the body and mind * Herald *
Thought-provoking ... You'll be gripped as Eddie, Laura and their neighbours turn back into one endangered tribe, trying to survive. Keep some H20 handy while you read this... * Best *
Thirst mirrors the deep anxiety so many feel about modern life: that its complexity makes it fragile and that we're all living on the edge of disaster * Mary Doria Russell, author of The Sparrow and Epitaph *
A gripping parable of love and survival as well as a harrowing exploration of our darkest selves. Thrilling and thought-provoking, and dazzling in scope, Benjamin Warner's debut is a surprising, profound portrait of desperation and humanity - and who we are when we are stripped down to our most basic needs * Catherine Chung, author of Forgotten Country *
Warner's devastating and breathtaking debut is a novel about water. But it's also about what it means to be in love, what it means to share - or to think you are sharing - your life with another person. This is a story about community (that ever slippery union) and, further still, about humanity ... Warner taps into a universal: Even at our lowest, our loneliest, and in our most desperate hour, we are still human, still connected ... Read this book. It will make you a better person * Hannah Pittard, author of Reunion *
Thirst tracks the breakdown of society in slow motion from the point of Eddie Chapman's discovery that the water supply has dried up. That there is no explanation for this doesn't matter; the rural setting, too, doesn't feel especially American - Warner seems to be aiming for the universalising opacity of Saramago's Blindness ... Warner's main focus is Eddie and his girlfriend and their struggle to find water - hell, liquid of any sort, even pickling vinegar * Guardian *

GOR009955345
Thirst by Benjamin Warner
Benjamin Warner
Used - Very Good
Paperback
Bloomsbury Publishing PLC
2016-07-14
304
140886505X
9781408865057
N/A
Book picture is for illustrative purposes only, actual binding, cover or edition may vary.
This is a used book - there is no escaping the fact it has been read by someone else and it will show signs of wear and previous use. Overall we expect it to be in very good condition, but if you are not entirely satisfied please get in touch with us.