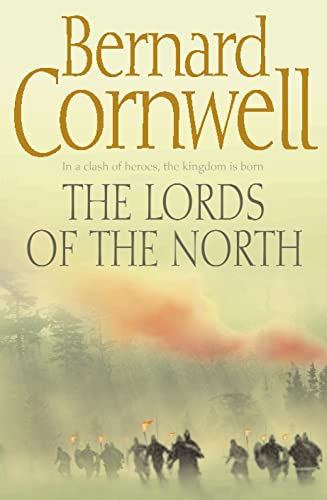 The year is 878 and Wessex is free from the Vikings. Uhtred, the dispossessed son of a Northumbrian lord, helped Alfred win that victory, but now he is disgusted by Alfred's lack of generosity and repelled by the king's insistent piety. This is a story of betrayal, romance and struggle, set in an England of turmoil, upheaval, and glory.

The year is 878 and Wessex is free from the Vikings.Uhtred, the dispossessed son of a Northumbrian lord, helped Alfred win that victory, but now he is disgusted by Alfred's lack of generosity and repelled by the king's insistent piety. He flees Wessex, going back north to seek revenge for the killing of his foster father and to rescue his stepsister, captured in the same raid. He needs to find his old enemy, Kjartan, a renegade Danish lord who lurks in the formidable stronghold of Dunholm.

'The Lords of the North' is a powerful story of betrayal, romance and struggle, set in an England of turmoil, upheaval and glory. Uhtred, a Northumbrian raised as a Viking, a man without lands, a warrior without a country, has become a splendid heroic figure.

'Beautifully crafted story-telling, complete with splendid set-piece battles and relentless derring-do, so gripping that it rarely stops to catch a breath. It demonstrates once again Cornwell's enormous skill as a historical narrator. He would have graced Alfred's court entertaining the guests with his stories.'
Daily Mail

GOR009600852
9780007219698
0007219695
The Lords of the North (The Last Kingdom Series, Book 3) by Bernard Cornwell
Bernard Cornwell
The Last Kingdom Series
Used - Like New
Paperback
HarperCollins Publishers
2006-05-22
336
N/A
Book picture is for illustrative purposes only, actual binding, cover or edition may vary.
The book has been read, but looks new. The book cover has no visible wear, and the dust jacket is included if applicable. No missing or damaged pages, no tears, possible very minimal creasing, no underlining or highlighting of text, and no writing in the margins
Trustpilot