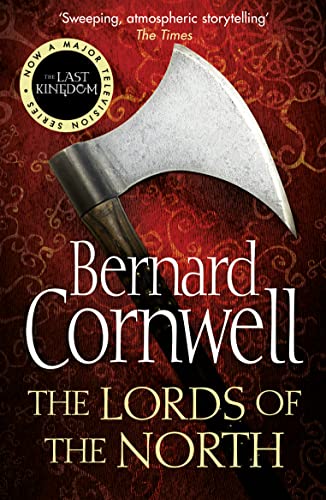 Uhtred wants revenge. He wants the land and castle that is his. He wants his treacherous uncle to pay for taking them.

Heading north with his lover, former nun Hild, he finds chaos as the Vikings battle among themselves to consolidate their hold on the region. At the heart of it are men from Uhtred's past - Sven the One-Eyed and Kjartan the Cruel, men of vicious reputation. Still, he has matched such men before.

Then Uhtred suffers a betrayal to rival the treachery that deprived him of his birthright. It will leave him trapped with no hope of escape ...

Uhtred of Bebbanburg's mind is as sharp as his sword. A thorn in the side of the priests and nobles who shape his fate, this Saxon raised by Vikings is torn between the life he loves and the cause he has sworn to serve.

'Beautifully crafted story-telling, complete with splendid set-piece battles and relentless derring-do, so gripping that it rarely stops to catch a breath. It demonstrates once again Cornwell's enormous skill as a historical narrator. He would have graced Alfred's court entertaining the guests with his stories.'
Daily Mail

GOR001233718
9780007219704
0007219709
The Lords of the North (The Last Kingdom Series, Book 3) by Bernard Cornwell
Bernard Cornwell
The Last Kingdom Series
Used - Very Good
Paperback
HarperCollins Publishers
20061204
400
N/A
Book picture is for illustrative purposes only, actual binding, cover or edition may vary.
This is a used book - there is no escaping the fact it has been read by someone else and it will show signs of wear and previous use. Overall we expect it to be in very good condition, but if you are not entirely satisfied please get in touch with us
Trustpilot