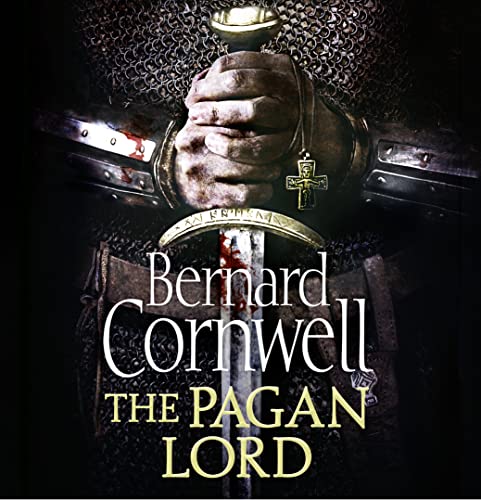 The Pagan Lord
by Bernard Cornwell

Alfred the Great is dead and Edward his son reigns as king. Wessex survives but peace cannot hold. The Danes in the north, led by Viking Cnut Longsword, stand ready to invade and will never rest until the emerald crown is theirs.

Uhtred, once Alfred's great warrior but now out of favour with the new king, must lead a band of outcasts north to recapture his old family home, that great Northumbrian fortress, Bebbanburg.

Loyalties will be divided and men will fall, as every Saxon kingdom is drawn into the bloodiest battle yet with the Danes; a war which will decide the fate of every king, and the entire English nation.

Praise for THE PAGAN LORD:

`Bernard Cornwell is always in full command of his material and The Pagan Lord demonstrates his unobtrusive skills as a novelist... Cornwell provides his usual pleasures of a strong narrative, vigorous action and striking characterisation. Like some of his characters he remains king of the territory he has staked out as his own' SUNDAY TIMES

GOR007276573
The Pagan Lord (The Last Kingdom Series, Book 7) by Bernard Cornwell
Bernard Cornwell
The Last Kingdom Series
Used - Very Good
Hardback
HarperCollins Publishers
2013-09-26
0007527322
9780007527328
N/A
Book picture is for illustrative purposes only, actual binding, cover or edition may vary.
This is a used book - there is no escaping the fact it has been read by someone else and it will show signs of wear and previous use. Overall we expect it to be in very good condition, but if you are not entirely satisfied please get in touch with us.