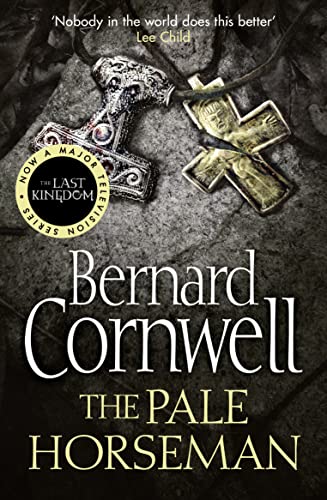 The second book in the epic and bestselling series that has gripped millions.

The second book in the epic and bestselling series that has gripped millions.

When peace is torn apart by bloody Danish steel, Uhtred must fight to save a king who distrusts him.

Skeptical of a treaty between the Vikings and Wessex, Uhtred takes his talent for mayhem to Cornwall, gaining treasure and a mysterious woman on the way. But when he is accused of massacring Christians, he finds lies can be as deadly as steel.

Still, when pious King Alfred flees to a watery refuge, it is the pagan warrior he relies on. Now Uhtred must fight a battle which will shape history - and confront the Viking with the banner of the white horse ...

'It is stirring stuff, and few writers are better qualified than Cornwell to do justice to the excitement of the times...Ninth-century Britain and a master of storytelling - it is a marriage made in heaven.' Sunday Telegraph

'Cornwell's mastery of historical sources and his aptitude for battle scenes is well established...the language, and particularly the dialogue, is raw and unarchaic, rich in insults and Anglo-Saxon expletives.' Times Literary Supplement

GOR001230147
9780007149933
000714993X
The Pale Horseman (The Last Kingdom Series, Book 2) by Bernard Cornwell
Bernard Cornwell
The Last Kingdom Series
Used - Very Good
Paperback
HarperCollins Publishers
2007-07-08
432
N/A
Book picture is for illustrative purposes only, actual binding, cover or edition may vary.
This is a used book - there is no escaping the fact it has been read by someone else and it will show signs of wear and previous use. Overall we expect it to be in very good condition, but if you are not entirely satisfied please get in touch with us
Trustpilot