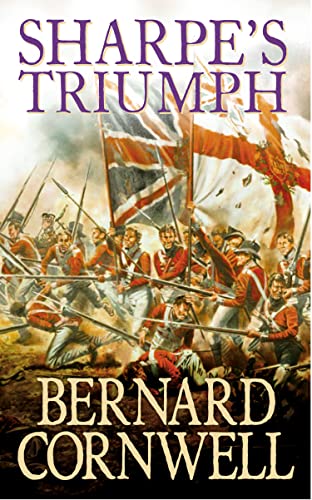 The latest of Cornwell's perennially popular Sharpe adventures, returning, like Sharpe's Tiger, to India, and culminating with the battle at Assaye which Wellington considered his greatest victory. Repackaged in the fantastic new Sharpe look.

The latest of Cornwell's perennially popular Sharpe adventures, returning, like Sharpe's Tiger, to India, and culminating with the battle at Assaye which Wellington considered his greatest victory. Repackaged in the fantastic new Sharpe look.

Sergeant Richard Sharpe witnesses a murderous act of treachery by an English officer who has defected from the East India Company to join the Mahratta Confederation. In the hunt for the renegade Englishman, Sharpe penetrates deep into enemy territory where he is followed relentlessly by his worst enemy, Sergeant Obadiah Hakeswill.

The paths of treachery all lead to the small villiage of Assaye where Sir Arthur Wellesley, with a diminished British army, faces the Mahratta horde. Outnumbered and outgunned, Wellesley plunges his men into the white heat of battle. A battle that will make his reputation, and perhaps Sharpe's too.

GOR008713364
Sharpe's Triumph: The Battle of Assaye, September 1803 (The Sharpe Series, Book 2) by Bernard Cornwell
Bernard Cornwell
The Sharpe Series
Used - Like New
Paperback
HarperCollins Publishers
1999-07-05
384
0006510302
9780006510307
N/A
Book picture is for illustrative purposes only, actual binding, cover or edition may vary.
The book has been read, but looks new. The book cover has no visible wear, and the dust jacket is included if applicable. No missing or damaged pages, no tears, possible very minimal creasing, no underlining or highlighting of text, and no writing in the margins.