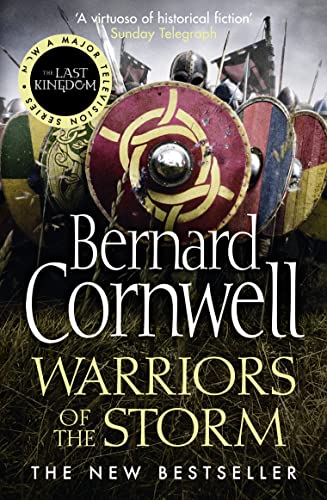 Warriors of the Storm
by Bernard Cornwell

Warriors of the Storm Summary

Warriors of the Storm (The Last Kingdom Series, Book 9) by Bernard Cornwell

A fragile peace is about to be broken...

King Alfred's son Edward and formidable daughter, AEthelflaed, rule Wessex, Mercia and East Anglia. But all around the restless Northmen, eyeing the rich lands and wealthy churches, are mounting raids.

Uhtred of Bebbanburg, the kingdoms' greatest warrior, controls northern Mercia from the strongly fortified city of Chester. But forces are rising up against him. Northmen allied to the Irish, led by the fierce warrior Ragnall Ivarson, are soon joined by the Northumbrians, and their strength could prove overwhelming. Despite the gathering threat, both Edward and AEthelflaed are reluctant to move out of the safety of their fortifications. But with Uhtred's own daughter married to Ivarson's brother, who can be trusted?

In the struggle between family and loyalty, between personal ambition and political commitment, there will be no easy path. But a man with a warrior's courage may be able to find it. Such a man is Uhtred,and this may be his finest hour.

Warriors of the Storm Reviews

'A tense, powerful and compulsive story' THE TIMES

'A master of storytelling' SUNDAY TELEGRAPH

GOR007426207
Warriors of the Storm (The Last Kingdom Series, Book 9) by Bernard Cornwell
Bernard Cornwell
The Last Kingdom Series
Used - Very Good
Paperback
HarperCollins Publishers
2016-04-21
368
0007504098
9780007504091
N/A
Book picture is for illustrative purposes only, actual binding, cover or edition may vary.
This is a used book - there is no escaping the fact it has been read by someone else and it will show signs of wear and previous use. Overall we expect it to be in very good condition, but if you are not entirely satisfied please get in touch with us.