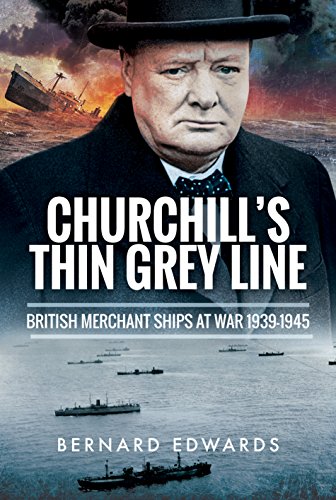 In Stock
£19.99
Overdue recognition of the contribution of the Merchant Navy
New£19.99
Only 2 left

The first British casualties of the Second World War were not members of either the Royal Navy, the Army or the Royal Air Force but British merchant seamen on the liner Athenia, torpedoed by U-30 on 3 September 1939.

For the duration of the War, Britain's merchant fleet performed a vital role, carrying the essential supplies that kept the country running during the darkest days and then made victory possible. Their achievements came at a terrible cost with 2,535 British oceangoing merchant ships being sunk and, of the 185,000 men and women serving in the British Merchant Navy at the time, 36,749 sacrificed their lives. A further 4,707 were wounded and 5,720 ended up in prisoner of war camps. Their casualty rate of 25 percent was second only to RAF Bomber Command's.

Using casebook examples, this well researched book tells the inspiring story of those brave civilian volunteers who fought so gallantly to defend their ships and the cargoes.

"... a most welcome book as it helps to broaden the general interest in an important facet of naval/maritime history..."--Naval Historical Foundation
"Edwards offers brief glimpses at many heroic mariners, and even some enemy personnel. This offers an interesting look at the war on maritime commerce and may be particularly useful for readers with little knowledge of this aspect of the war, despite the absence of maps."--The NYMAS Review
"One might guess that the first British casualties of World War II were suffered by either the Army, Royal Navy or Royal Air Force. But that unfortunate distinction belongs to merchant seamen on the liner Athenia, which was torpedoed by the German submarine U-30 Sept. 3, 1939. Sailors like those are saluted by Bernard Edwards. [...] The author recounts their vital role in carrying crucial supplies during the island nation's darkest days, then helping make ultimate victory possible."--Toy Soldier & Model Figure

Bernard Edwards pursued a sea-going career commanding ships trading worldwide. After nearly forty years afloat. Captain Edwards settled in a tiny village in rural South Wales, to pursue his second career as a writer. His extensive knowledge of the sea and ships has enabled him to produce many authentic and eminently readable books which have received international recognition.