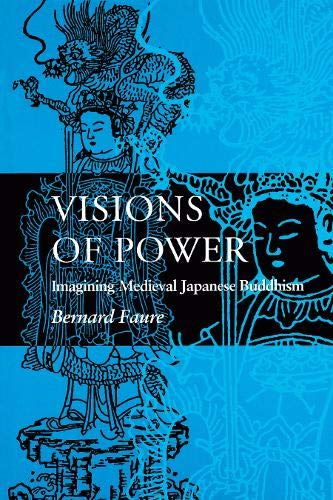 Visions of Power
by Bernard Faure

In Stock
£22.99
This text continues Faure's attempts to bring postmodernist critical techniques to the study of Chan/Zen. It explores the "mental universe" of the Buddhist Soto Zen master, Keizan Jokin, whose doctrine was allegedly reasonable and demythologizing, but who lived in a deeply psychological world.
Very Good
Only 1 left

Bernard Faure's previous works are well known as guides to some of the more elusive aspects of the Chinese tradition of Chan Buddhism and its outgrowth, Japanese Zen. Continuing his efforts to look at Chan/Zen with a full array of post-modernist critical techniques, Faure now probes the "imaginaire", or mental universe, of the Buddhist Soto Zen master Keizan Jokin (1268-1325). Although Faure's new book may be read at one level as an intellectual biography, Keizan is portrayed here less as an original thinker than as a representative of his culture and an example of the paradoxes of the Soto school. The Chan/Zen doctrine that he avowed was allegedly reasonable and de-mythologising, but he lived in a psychological world that was just as imbued with the marvelous as was that of his con-temporary Dante Alighieri. Drawing on his own dreams to demonstrate that he possessed the magical authority that he felt to reside also in icons and relics, Keizan strove to use these "visions of power" to buttress his influence as a patriarch. To reveal the historical, institutional, ritual, and visionary elements in Keizan's life and thought and to compare these to Soto doctrine, Faure draws on largely neglected texts, particularly the "Record of Tokoku" (a chronicle that begins with Keizan's account of the origins of the first of the monasteries that he established) and the "kirigami", or secret initiation documents.

"[Faure's] account of Keizan is a convincing conquest of historical vision, and opens up the exciting prospect of similar treatment for a whole gallery of figures from the Buddhist past."---Joseph S. O'Leary, Japanese Journal of Religious Studies
"Faure ... has reconstructed the study of Zen as a religion to the point that scholars of religion generally should begin turning to this field to find what they would not expect: a rich tradition of icons, rituals, myths, and magic power. This volume is the best place for them to start."---James H. Foard, The Journal of Religion
"In Visions of Power, Faure once again demonstrates his superb command of original sources as well as an innovative methodology that constantly probes uncharted territory and boldly overturns the prevailing assumptions of the orthodox view of a 'pure' iconoclastic Zen tradition.... [This book] is eminently successful in carving out a distinct yet complementary agenda in content, method, and approach."---Steven Heine, Monumenta Nipponica

Bernard Faure is Professor of Religious Studies at Stanford University. He is the author of The Red Thread: Buddhist Approaches to Sexuality; Chan Insights and Oversights: An Epistemological Critique of the Chan Tradition; and The Rhetoric of Immediacy: A Cultural Critique of Chan/Zen Buddhism, all available from Princeton.

GOR009968614
Visions of Power: Imagining Medieval Japanese Buddhism by Bernard Faure
Bernard Faure
Used - Very Good
Hardback
Princeton University Press
1996-05-05
336
0691037582
9780691037585
N/A
Book picture is for illustrative purposes only, actual binding, cover or edition may vary.
This is a used book - there is no escaping the fact it has been read by someone else and it will show signs of wear and previous use. Overall we expect it to be in very good condition, but if you are not entirely satisfied please get in touch with us.