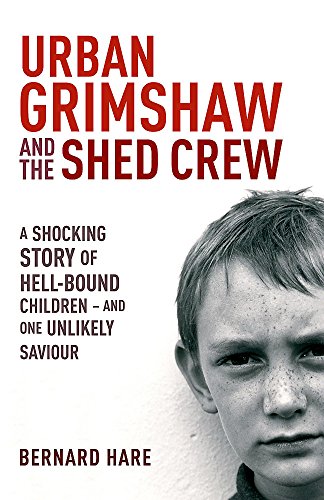 Urban Grimshaw and The Shed Crew
by Bernard Hare

In Stock
£3.59
An eye-opening, jaw-dropping account of Britain's dispossessed youth and inner city wastelands by an insider, as funny and inspiring as it is heartbreaking. 'Another CITY OF GOD, this time for Britain rather than Brazil.' Observer
Like New Very Good
Only 2 left

Urban Grimshaw and The Shed Crew by Bernard Hare

You're twelve years old. Your mother's a junkie and your father might as well be dead. You can't read or write, and you don't go to school. An average day means sitting round a bonfire with your mates smoking drugs, or stealing cars.

Bernard Hare was on society's margins, living on one of Leeds' roughest estates and with a liking for drink and drugs. So he knew what life in the underclass was like in '90s Britain. But even he was shocked when he met Urban, an illiterate, glue-sniffing twelve-year-old. And through Urban he got to know the Shed Crew - an anarchic gang of kids between the ages of ten and fourteen; joy-riding, thieving runaways, who were no strangers to drugs or sex. Nearly all had been in care, but few adults really cared.

Bernard decided to do what he could. He didn't know what he was letting himself in for.

A dark and bitterly funny window on to a part of British life that most would rather sweep under the carpet . . . both inspiring and uplifting. * Daily Telegraph *
A compelling piece of ethnography, but it is also a deeply personal memoir . . . Moving but never sanctimonious, it is another City of God, this time for Britain rather than Brazil. * Observer *
A damnation of British society that is both violently shocking and laugh-out-loud funny, reading somewhere between a pre-teen Trainspotting and a northern-English equivalent of Larry Clark's Kids . . . a memoir with attitude * Big Issue *
Hare writes with laconic self-deprecation, black humour and a humane, ever present sense of railing against the system that failed Urban and his gang . . . exceptional * Metro *
An extraordinary account of the parallel world of missing children who live under our noses in every inner city, but officially don't exist. * Sunday Times *
A cross between a grim fairytale and a reflective, brazen anecdote . . . a marvellous read. * Alexander Masters, Daily Mail *
This is writing from the edge. Bernie Hare is a truly original voice. He deserves to be big - really big! * Fergal Keane *
'Don't miss Bernard Hare's astonishing account of his relationship with Urban Grimshaw and the Shed Crew' * Anne Fine, Books of the Year, Sunday Herald *
'As a record of contemporary Britain, it is searing...Hare is never sensationalist, sentimental, judgemental or self-regarding' * Sheena Joughin, Times Literary Supplement *
'It reads like a novel - a gripping, vivid, deeply affecting piece of work' * Decca Aitkenhead, New Statesman *
Unexpectedly powerful. * Time Out Books of the Year *

Bernard Hare was born in 1958 into a Leeds mining family. After gaining a BA in Applied Social Studies at Hatfield Polytechnic, he became a social worker, but after the miners' strike of 1984 he dropped out of the system and has since worked variously as a mechanic, community worker and removal man. He now writes, plays chess, and works in community arts: he has edited Reflections, a collection of pieces by the creative writing class at East Leeds Family Learning Centre, and Flatlands, an anthology of writing and a CD of music by local people put together by the Flatlands Community Arts Group, which he co-founded.

GOR007830386
Urban Grimshaw and The Shed Crew by Bernard Hare
Bernard Hare
Used - Like New
Paperback
Hodder & Stoughton General Division
2006-04-10
320
0340837357
9780340837351
N/A
Book picture is for illustrative purposes only, actual binding, cover or edition may vary.
The book has been read, but looks new. The book cover has no visible wear, and the dust jacket is included if applicable. No missing or damaged pages, no tears, possible very minimal creasing, no underlining or highlighting of text, and no writing in the margins.