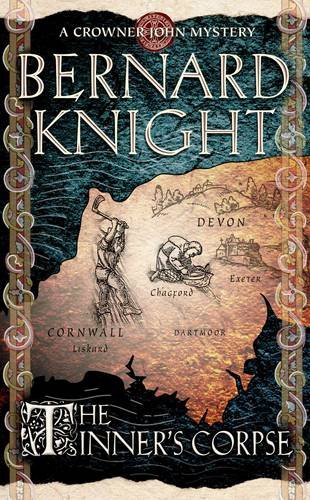 The Tinner's Corpse
by Bernard Knight

The Tinner's Corpse by Bernard Knight

When Crowner John is summoned to the bleak Devonshire moors to investigate the murder of a tin miner, he has little idea how difficult this new investigation will prove to be. The victim is a trusted and well-loved overman of Devon's most powerful and successful mine owner, Walter Knapman. There seems to be only one possible motive - to sabotage Walter's business. But the tinners have their own laws, and they are none too pleased at Crowner John's interference. Especially as their main experience of officials has been with Sheriff Richard de Revelle, whose notoriously high taxes keep them in a permanent state of fury and near rebellion. And then Walter disappears. Stephen Acland, Walter's business rival wastes no time in comforting Walter's beautiful wife Joan, who appears remarkably unmoved by her husband's disappearance. Meanwhile, Walter's brother is going frantic with worry ... or could it be guilt? A decapitated body, a missing tinner, a disgruntled band of miners and a mad Saxon, intent on the destruction of all things Norman. How on earth can Crowner John sort all this out when his wife hates him, his mistress has spurned him for a younger man, and his clerk is in the grip of a suicidal depression? Only Gwyn, Crowner John's indispensable right-hand man seems to be of any help at all, until he is arrested for murder and put on trial for his life.

Medieval England is powerfully evoked in these gritty forensic investigations, with Sir John de Wolfe, Devon's first county coroner, at the heart of each riveting tale. Bernard Knight, CBE, is Professor of Pathology at the University of Wales College of Medicine. During his distinguished forty-year career as a coroner, he was involved in many of Britain's major criminal cases.
"Shots" John de Wolfe is a truly powerful character
"Historical Novels Review" Knight brings medieval Exeter to life with gritty realism, smells and all, but with an underlying sympathy and humour

Professor Bernard Knight, CBE, became a Home Office Pathologist in 1965 and was appointed Professor of Forensic Pathology, University of Wales College of Medicine, in 1980. During his 40-year career with the Home Office, he performed over 25,000 autopsies, and was involved in many high profile cases, including that of Fred and Rose West, and the child killer, Mary Bell. The author of numerous popular and academic non-fiction books, he has written thirteen novels in the Crowner John mystery series. Professor Knight lives in Cardiff.

GOR001031093
The Tinner's Corpse by Bernard Knight
Bernard Knight
A Crowner John Mystery
Used - Very Good
Paperback
Simon & Schuster
2001-08-06
352
0671029665
9780671029661
N/A
Book picture is for illustrative purposes only, actual binding, cover or edition may vary.
This is a used book - there is no escaping the fact it has been read by someone else and it will show signs of wear and previous use. Overall we expect it to be in very good condition, but if you are not entirely satisfied please get in touch with us.