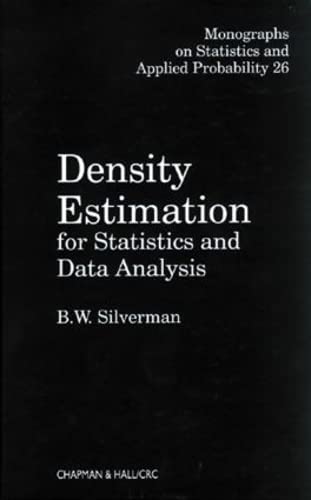 Out of Stock
£22.99
An exposition of density estimation for statistics and data analysis. A volume in the "Monographs on Statistics and Applied Probability" series, it is designed for applied statisticians
Very Good
Only 0 left

Although there has been a surge of interest in density estimation in recent years, much of the published research has been concerned with purely technical matters with insufficient emphasis given to the technique's practical value. Furthermore, the subject has been rather inaccessible to the general statistician.

The account presented in this book places emphasis on topics of methodological importance, in the hope that this will facilitate broader practical application of density estimation and also encourage research into relevant theoretical work. The book also provides an introduction to the subject for those with general interests in statistics. The important role of density estimation as a graphical technique is reflected by the inclusion of more than 50 graphs and figures throughout the text.

Several contexts in which density estimation can be used are discussed, including the exploration and presentation of data, nonparametric discriminant analysis, cluster analysis, simulation and the bootstrap, bump hunting, projection pursuit, and the estimation of hazard rates and other quantities that depend on the density. This book includes general survey of methods available for density estimation. The Kernel method, both for univariate and multivariate data, is discussed in detail, with particular emphasis on ways of deciding how much to smooth and on computation aspects. Attention is also given to adaptive methods, which smooth to a greater degree in the tails of the distribution, and to methods based on the idea of penalized likelihood.

"This well-written and moderately priced volume has removed any excuse for ignorance concerning density estimation on the part of applied statisticians; they will find the style refreshingly down-to-earth, and will value the clearsighted exposition. I thoroughly enjoyed reading it, and can recommend it wholeheartedly." -Short Book Reviews "Highly recommended." -Choice

GOR010305641
Density Estimation for Statistics and Data Analysis by Bernard. W. Silverman (St Peter's College, Oxford, UK)
Bernard. W. Silverman (St Peter's College, Oxford, UK)
Chapman & Hall/CRC Monographs on Statistics and Applied Probability
Used - Very Good
Hardback
Taylor & Francis Ltd
1986-04-01
176
0412246201
9780412246203
N/A
Book picture is for illustrative purposes only, actual binding, cover or edition may vary.
This is a used book - there is no escaping the fact it has been read by someone else and it will show signs of wear and previous use. Overall we expect it to be in very good condition, but if you are not entirely satisfied please get in touch with us.