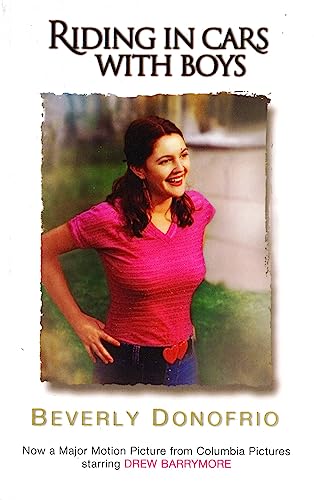 Riding In Cars With Boys by Beverly Donofrio

* 'Beverly Donofrio lives and writes as though she was born without brakes -- it's shrewd, touching, funny and astonishing' Joanna Lumley

Riding In Cars With Boys: Confessions of a Bad Girl Who Makes Good by Beverly Donofrio

Trouble began in 1963. I'm not blaming it on President Kennedy's assassination or its being the beginning of the sixties or the Vietnam War or The Beatles...The trouble I'm talking about was my first real trouble, the age-old trouble. The getting in trouble as in ' Is she in trouble?' trouble. As in pregnant. As in the girl who got pregnant in high school.'

Beverly Ann Donofrio wasn't bad because she hung out with hoods - she was bad because she was a hood. Unable to attend college, she lost interest in everything but riding around in cars, drinking, smoking, and rebelling against authority. After her teenage marriage failed, Bev found herself at an elite New England university, books in one arm, child on the other. Then, furnished with ambition, dreams and five hundred dollars, she took herself and her son to New York to begin a career and a life. An outrageous and touching memoir, this is the story of a teenage mother who, as her son grows up, becomes an adult herself.

A classic. Unless you hate to laugh, read it now * CHICAGO TRIBUNE *
What Beverly Donofrio makes you realise is that even very, very B-A-D girls can redeem themselves with pluck, luck, and gallows humour. Every swoop and dive of this roller coaster life presents another off-kilter view of humanity. You're just so glad it * Jacki Lyden, author of DAUGHTER OF THE QUEEN OF SHEBA *
She writes as though she was born without brakes- it's shrewd, touching, funny and astonishing. * Joanna Lumley *
She describes her relucant disastrous marriage at 17 and subsequent battle to educate herself, while brining up her son alone on welfare, with a humour and tenacity that is touching and shockingly funny... This sends her spare, witty prose dancing across t * OBSERVER *
Beverly Donofrio studied at Wesleyan University, then went on to receive an MFA in creative writing from Columbia University. Her work has appeared in The Village Voice and New York magazine. She is also the author of Looking for Mary.
GOR000399500
9781860499470
1860499473
Riding In Cars With Boys: Confessions of a Bad Girl Who Makes Good by Beverly Donofrio
Beverly Donofrio
Used - Very Good
Paperback
Little, Brown Book Group
2001-12-06
192
N/A
Book picture is for illustrative purposes only, actual binding, cover or edition may vary.
This is a used book - there is no escaping the fact it has been read by someone else and it will show signs of wear and previous use. Overall we expect it to be in very good condition, but if you are not entirely satisfied please get in touch with us
Trustpilot