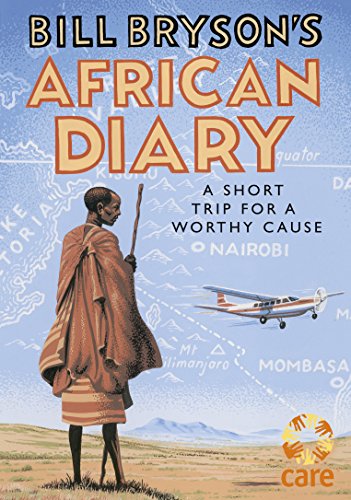 Bill Bryson goes to Kenya at the invitation of CARE International, the charity dedicated to working with local communities to eradicate poverty around the world.

Bill Bryson goes to Kenya at the invitation of CARE International, the charity dedicated to working with local communities to eradicate poverty around the world. Kenya, generally regarded as the cradle of humankind, is a land of stunning landscapes, famous game reserves, and a vibrant culture, but it also has many serious problems, including refugees, AIDS, drought and grinding poverty. It also provides plenty to worry a nervous traveller like Bill Bryson: hair-raising rides in light aircraft, tropical diseases, snakes, insects and large predators.

Bryson casts his inimitable eye on a continent new to him, and the resultant diary, though short in length, contains all his trademark laugh-out-loud wit, wry observation and curious insight.

All the author's royalties from this book, as well as all profits, will go to CARE International.

GOR009256963
Bill Bryson's African Diary by Bill Bryson
Bill Bryson
Used - Like New
Hardback
Transworld Publishers Ltd
2016-05-19
64
0857524208
9780857524201
N/A
Book picture is for illustrative purposes only, actual binding, cover or edition may vary.
The book has been read, but looks new. The book cover has no visible wear, and the dust jacket is included if applicable. No missing or damaged pages, no tears, possible very minimal creasing, no underlining or highlighting of text, and no writing in the margins.