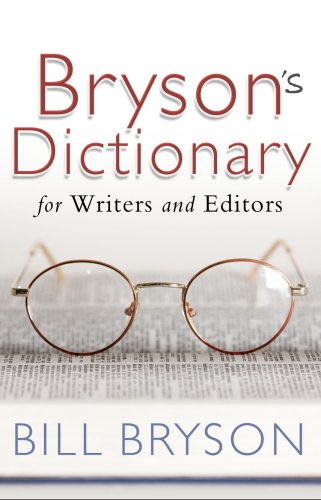 Bryson's Dictionary: for Writers and Editors
by Bill Bryson

Bryson's Dictionary: for Writers and Editors by Bill Bryson

What is the difference between cant and jargon, or assume and presume? What is a fandango? How do you spell supersede? Is it hippy or hippie? These questions really matter to Bill Bryson, as they do to anyone who cares about the English language. Originally published as The Penguin Dictionary for Writers and Editors, Bryson's Dictionary for Writers and Editors has now been completely revised and updated for the twenty-first century by Bill Bryson himself. Here is a very personal selection of spellings and usages, covering such head-scratchers as capitalization, plurals, abbreviations and foreign names and phrases. Bryson also gives us the difference between British and American usages, and miscellaneous pieces of essential information you never knew you needed, like the names of all the Oxford colleges, or the correct spelling of Brobdingnag. An indispensable companion to all those who write, work with the written word, or who just enjoy getting things right, it gives rulings that are both authoritative and commonsense, all in Bryson's own inimitably goodhumoured way.

"Sensible advice... Bryson is against pomposity and in favour of clarity and brevity... His pet hates are particularly well judged, by which I mean they are mine too. Time and again, I found myself cheering him on... Evelyn Waugh would find much to surprise and please him here... provides plenty of ammunition for anoraky one-upmanship" -- Craig Brown * Mail on Sunday *
"Now your favourite transplanted American (and mine) has ventured into the field of Linguistic Guidance for Limeys... Language lovers - of every stripe and creed - should raise three cheers.... clear out your linguistic cobwebs, with the help of Bill Bryson" -- Erica Wagner * The Times *
"As a newspaper sub-editor myself (Bryson's original trade), I've read this guide to spelling, grammar and usage from front to back and have to say one thing. It's brilliant. It should be on the shelf of anyone aspiring to make a living using the English language... the best book of its type yet written" * Daily Mail *

GOR002020287
Bryson's Dictionary: for Writers and Editors by Bill Bryson
Bill Bryson
Used - Very Good
Paperback
Transworld Publishers Ltd
2009-04-23
464
0552773530
9780552773539
N/A
Book picture is for illustrative purposes only, actual binding, cover or edition may vary.
This is a used book - there is no escaping the fact it has been read by someone else and it will show signs of wear and previous use. Overall we expect it to be in very good condition, but if you are not entirely satisfied please get in touch with us.