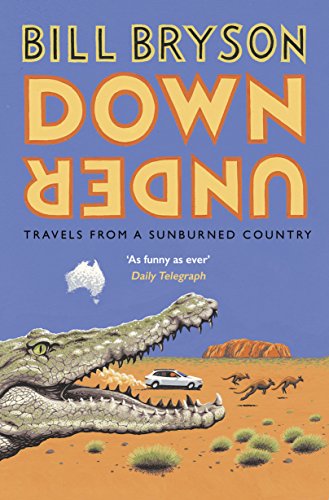 Down Under
by Bill Bryson

It is the driest, flattest, hottest, most desiccated, infertile and climatically aggressive of all the inhabited continents and still Australia teems with life - a large portion of it quite deadly.

Down Under: Travels in a Sunburned Country by Bill Bryson

It is the driest, flattest, hottest, most desiccated, infertile and climatically aggressive of all the inhabited continents and still Australia teems with life - a large portion of it quite deadly. In fact, Australia has more things that can kill you in a very nasty way than anywhere else.

Ignoring such dangers - and yet curiously obsessed by them - Bill Bryson journeyed to Australia and promptly fell in love with the country. And who can blame him? The people are cheerful, extrovert, quick-witted and unfailingly obliging: their cities are safe and clean and nearly always built on water; the food is excellent; the beer is cold and the sun nearly always shines. Life doesn't get much better than this...

Customer Reviews - Down Under

GOR007411608
Down Under: Travels in a Sunburned Country by Bill Bryson
Bill Bryson
Bryson
Used - Very Good
Paperback
Transworld Publishers Ltd
2015-11-05
432
1784161837
9781784161835
N/A
Book picture is for illustrative purposes only, actual binding, cover or edition may vary.
This is a used book - there is no escaping the fact it has been read by someone else and it will show signs of wear and previous use. Overall we expect it to be in very good condition, but if you are not entirely satisfied please get in touch with us.