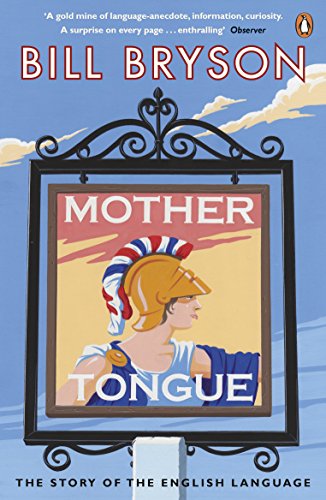 Used Price
£5.49
New RRP £9.99
Free Shipping in the UK
Presenting a tour of English from its mongrel origins to its status as the world's most-spoken tongue; its apparent simplicity to its deceptive complexity; its vibrant swearing to its uncertain spelling and pronunciation, this book covers curious eccentricities that make it as maddening to learn and as flexible to use.
Reviews:
Trustpilot
Like New Very Good Good Well Read

Mother Tongue: The Story of the English Language by Bill Bryson

'More than 300 million people in the world speak English and the rest, it sometimes seems, try to...'

Only Bill Bryson could make a book about the English language so entertaining. With his boundless enthusiasm and restless eye for the absurd, this is his astonishing tour of English. From its mongrel origins to its status as the world's most-spoken tongue; its apparent simplicity to its deceptive complexity; its vibrant swearing to its uncertain spelling and pronunciation, Bryson covers all this as well as the many curious eccentricities that make it as maddening to learn as it is flexible to use.

Bill Bryson's classic Mother Tongue is a highly readable and hilarious tale of how English came to be the world's language.

Not only fascinating but extremely funny -- Angus Deayton
The sort of linguistics I like, anecdotal, full of revelations, and with not one dull paragraph -- Ruth Rendell * Sunday Times *
A gold mine of language-anecdote, information, curiosity. A suprise on every page... enthralling * Observer *
Delightful, amusing and provoking... A joyful celebration of our wonderful language, which is packed with curiosities and enlightenment on every page * Sunday Express *
A delightful survey - though with its good humour, wealth of anecdote, and boyish enthusiasm, "romp" would be a better word. -- David Crystal

Bill Bryson was born in Des Moines, Iowa, and grew up there, but has spent most of his adult life in Britain. He has worked for a number of newspapers, including The Times and the Independent. His books on the English language include Mother Tongue and Troublesome Words, both published by Penguin.

Bill Bryson is the author of several bestsellers including The Lost Continent, Neither Here Nor There, Notes from a Small Island, A Walk in the Woods, Notes from a Big Country, Down Under, A Short History of Nearly Everything, One Summer: America 1927 and his memoir, The Life and Times of the Thunderbolt Kid. His most recent bestseller is The Road to Little Dribbling.

GOR008160123
Mother Tongue: The Story of the English Language by Bill Bryson
Bill Bryson
Used - Like New
Paperback
Penguin Books Ltd
2009-06-29
288
0141040084
9780141040080
N/A
Book picture is for illustrative purposes only, actual binding, cover or edition may vary.
This is a used book - there is no escaping the fact it has been read by someone else and it will show signs of wear and previous use. Overall we expect it to be in very good condition, but if you are not entirely satisfied please get in touch with us.