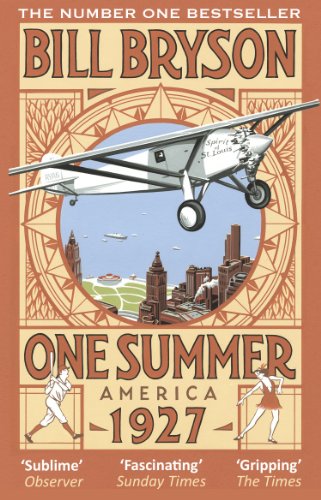 One Summer
by Bill Bryson

Used Price
£3.19
New RRP £10.99
Free Shipping in the UK
In summer 1927, America had a booming stock market, a president who worked just four hours a day (and slept much of the rest), a devastating flood of the Mississippi, a sensational murder trial, and an unknown aviator named Charles Lindbergh who became the most famous man on earth.
Reviews:
Trustpilot
Very Good

One Summer: America 1927 by Bill Bryson

In summer 1927, America had a booming stock market, a president who worked just four hours a day (and slept much of the rest), a devastating flood of the Mississippi, a sensational murder trial, and an unknown aviator named Charles Lindbergh who became the most famous man on earth. It was the summer that saw the birth of talking pictures, the invention of television, the peak of Al Capone's reign of terror, the horrifying bombing of a school in Michigan, the thrillingly improbable return to greatness of over-the-hill baseball player Babe Ruth, and an almost impossible amount more. In this hugely entertaining book, Bill Bryson spins a tale of brawling adventure, reckless optimism and delirious energy. With the trademark brio, wit and authority that make him Britain's favourite writer of narrative non-fiction, he brings to life a forgotten summer when America came of age, took centre stage, and changed the world.

"Bill Bryson is a true master of popular narrative. Over the course of his career, he has bestowed a beautiful clarity on even the most recondite of subjects...Has history ever been so enjoyable?" -- Craig Brown * Mail on Sunday *
"A fascinating snapshot of a season during which America, for better or worse, ushered in the modern world." * Sunday Times *
"A gifted raconteur...The book is filled with eccentric, flamboyant characters and memorable stories...highly amusing." * Guardian *
"A great new form of literature: biography of a few months in one country." -- Matt Ridley * The Times (Books of the Year) *
"Few writers of nonfiction, and,let's be honest,few enough writers of novels, can crack the narrative whip like Bryson. One Summer fairly whirls along...full of exhilarating, fact-filled fun...surely the most sublime distraction published this year." * Observer *

GOR005768860
One Summer: America 1927 by Bill Bryson
Bill Bryson
Bryson
Used - Very Good
Paperback
Transworld Publishers Ltd
2014-05-22
672
0552772569
9780552772563
N/A
Book picture is for illustrative purposes only, actual binding, cover or edition may vary.
This is a used book - there is no escaping the fact it has been read by someone else and it will show signs of wear and previous use. Overall we expect it to be in very good condition, but if you are not entirely satisfied please get in touch with us.