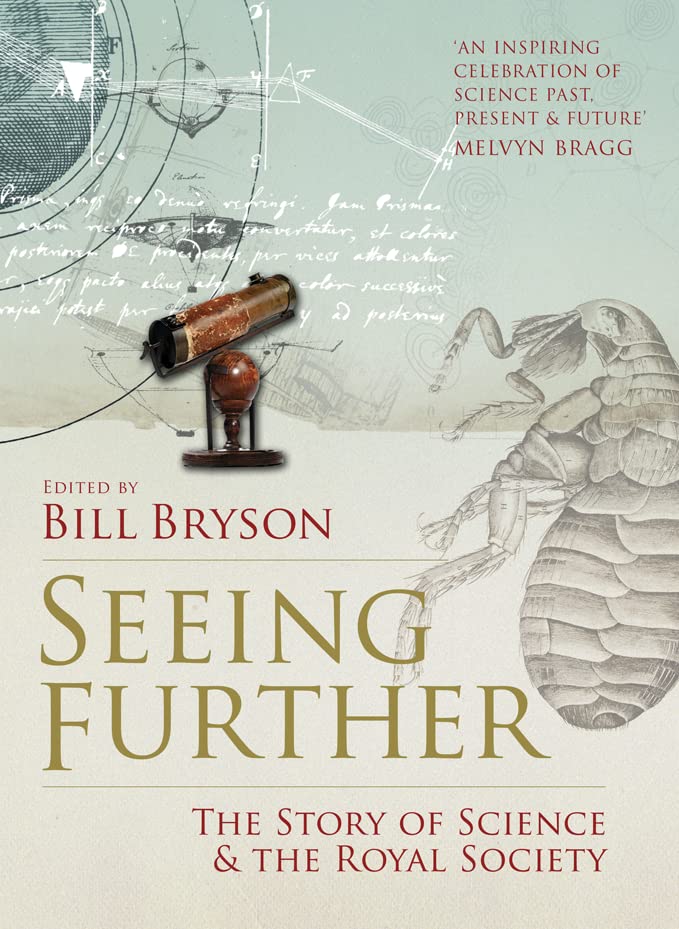 Edited and introduced by Bill Bryson, with contributions from Richard Dawkins, Margaret Atwood, Richard Holmes, Martin Rees, Richard Fortey, Steve Jones, James Gleick and Neal Stephenson amongst others, this beautiful, lavishly illustrated book tells the story of science and the Royal Society, from 1660 to the present.

Seeing Further: The Story of Science and the Royal Society by Bill Bryson

Edited and introduced by Bill Bryson, with contributions from Richard Dawkins, Margaret Atwood, Richard Holmes, Martin Rees, Richard Fortey, Steve Jones, James Gleick and Neal Stephenson amongst others, this beautiful, lavishly illustrated book tells the story of science and the Royal Society, from 1660 to the present.

On a damp weeknight in November, 350 years ago, a dozen or so men gathered at Gresham College in London. A twenty-eight year old - and not widely famous - Christopher Wren was giving a lecture on astronomy. As his audience listened to him speak, they decided that it would be a good idea to create a Society to promote the accumulation of useful knowledge. With that, the Royal Society was born.

Since its birth, the Royal Society has pioneered scientific exploration and discovery. Isaac Newton, Charles Darwin, Albert Einstein, Robert Hooke, Robert Boyle, Joseph Banks, Humphry Davy, Isambard Kingdom Brunel, John Locke, Alexander Fleming - all were fellows. Bill Bryson's favourite fellow was Reverend Thomas Bayes, a brilliant mathematician who devised Bayes' theorem. Its complexity meant that it had little practical use in Bayes' own lifetime, but today his theorem is used for weather forecasting, astrophysics and stock market analysis. A milestone in mathematical history, it only exists because the Royal Society decided to preserve it - just in case.

The Royal Society continues to do today what it set out to do all those years ago. Its members have split the atom, discovered the double helix, the electron, the computer and the World Wide Web. Truly international in its outlook, it has created modern science. Seeing Further celebrates its momentous history and achievements, bringing together the very best of science writing. Filled with illustrations of treasures from the Society's archives, this is a unique, ground-breaking and beautiful volume, and a suitable reflection of the immense achievements of science.

"Bill Bryson is as amusing as ever . . . As a celebration of modern science, "Seeing Further" is a worthy tribute."--The Economist

Bill Bryson is the internationally bestselling author of `The Lost Continent', `Mother Tongue', `Neither Here Nor There', `Made in America', `Notes from a Small Island', `A Walk in the Woods', `Notes from a Big Country', `Down Under', `The Life and Times of the Thunderbolt Kid' and `A Short History of Nearly Everything', which was shortlisted for the Samuel Johnson Prize, won the Aventis Prize for Science Books in 2004, and was awarded the Descartes Science Communication Prize in 2005.

GOR001919472
Seeing Further: The Story of Science and the Royal Society by Bill Bryson
Bill Bryson
Used - Very Good
Hardback
HarperCollins Publishers
2010-01-07
496
0007302568
9780007302567
N/A
Book picture is for illustrative purposes only, actual binding, cover or edition may vary.
This is a used book - there is no escaping the fact it has been read by someone else and it will show signs of wear and previous use. Overall we expect it to be in very good condition, but if you are not entirely satisfied please get in touch with us.