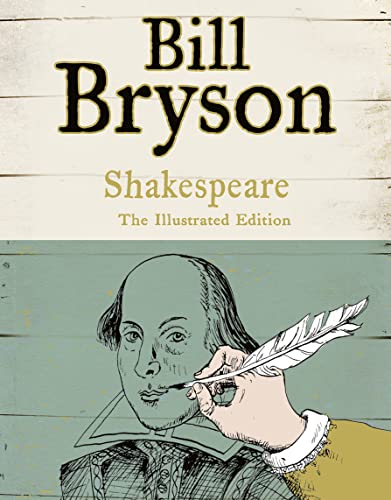 This exquisitely illustrated edition of Bill Bryson's best-selling biography of William Shakespeare takes the reader on an enthralling journey through Elizabethan England and the eccentricities of Shakespearean scholarship.

Shakespeare: The World as a Stage by Bill Bryson

This exquisitely illustrated edition of Bill Bryson's best-selling biography of William Shakespeare takes the reader on an enthralling journey through Elizabethan England and the eccentricities of Shakespearean scholarship.

Bill Bryson's biography of William Shakespeare pairs the most celebrated playwright in history with one of the most popular writers in the English language today. In this exquisitely illustrated new edition, the age of Shakespeare is vividly evoked through full-colour paintings, portraits, documents and photographs.

Ever since he took the theatre of Elizabethan London by storm over 400 years ago, Shakespeare has remained centre stage. His fame stems not only from his plays - performed everywhere from school halls to the world's most illustrious theatres - but also from his enigmatic persona. His face is familiar to all, yet in reality very little is known about the man behind the masterpieces.

Taking us on a journey through the streets of Elizabethan and Jacobean England, Bryson examines centuries of myths, half-truths and downright lies surrounding our greatest dramatist. With a steady hand and his trademark wit, he introduces a host of engaging characters, as he celebrates the magic of Shakespeare's language and delights in details of the bard's life, folios, poetry and plays.

An updated preface includes the recent discoveries of the Cobbe portrait and London's first purpose-built theatre in Shoreditch. Shakespeare: The Illustrated Edition is captivating and colourful, as Bryson brings the legend into focus with unmatched clarity and amusement.

Sonnets (audio CD)
Selected and read by Sir John Gielgud, these personal and initimate poems were recorded over a period of six months, on two continents, a few at a time. They are magnificently sensitive readings by the most memorable interpreter of Shakespeare in our time. The text follows the original quarto of 1609.

'A brilliantly funny and gently insightful travel guide to 16th century England. As an abbreviated tour around the world of Shakespeare, this could hardly be bettered.' Sunday Times

'Bryson is shrewd...and as funny as you'd expect...he sets down all the important bits of evidence, and assesses them in a measured scholarly way. He's good value too.' Daily Telegraph

'Measured, sensible and, at times, as wryly humorous as you'd expect.' The Times

'A work worthy of one of the greatest writers in the English language.' Daily Express

'Bryson uses an inimitably light touch and squeezes a vast subject down to manageable proportions...he is a warm and funny guide through the whole complicated morass of Shakespearean scholarship.' Financial Times

Bill Bryson's many books include, most recently `The Life and Times of the Thunderbolt Kid' as well as `A Short History of Nearly Everything`, `I'm a Stranger Here Myself', `A walk in the Woods', `Neither Here Nor There', `Made in America', and `Notes from a Small Island'. He edited `The Best American Travel Writing 2000'. Born in Des Moines, Iowa, USA, he now lives in Norfolk with his wife and four children.

GOR004724886
Shakespeare: The World as a Stage by Bill Bryson
Bill Bryson
Used - Very Good
Paperback
HarperCollins Publishers
2012-06-01
256
0007479638
9780007479634
N/A
Book picture is for illustrative purposes only, actual binding, cover or edition may vary.
This is a used book - there is no escaping the fact it has been read by someone else and it will show signs of wear and previous use. Overall we expect it to be in very good condition, but if you are not entirely satisfied please get in touch with us.