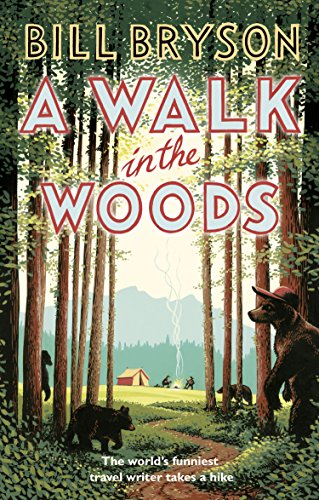 A Walk In The Woods
by Bill Bryson

Used Price
£6.99
New RRP £9.99
Free Shipping in the UK
In the company of his friend Stephen Katz (last seen in the bestselling Neither Here nor There), Bill Bryson set off to hike the Appalachian Trail, the longest continuous footpath in the world.
Reviews:
Trustpilot
Very Good Good Well Read

A Walk In The Woods Summary

A Walk In The Woods: The World's Funniest Travel Writer Takes a Hike by Bill Bryson

In the company of his friend Stephen Katz (last seen in the bestselling Neither Here nor There), Bill Bryson set off to hike the Appalachian Trail, the longest continuous footpath in the world. Ahead lay almost 2,200 miles of remote mountain wilderness filled with bears, moose, bobcats, rattlesnakes, poisonous plants, disease-bearing tics, the occasional chuckling murderer and - perhaps most alarming of all - people whose favourite pastime is discussing the relative merits of the external-frame backpack.

Facing savage weather, merciless insects, unreliable maps and a fickle companion whose profoundest wish was to go to a motel and watch The X-Files, Bryson gamely struggled through the wilderness to achieve a lifetime's ambition - not to die outdoors.

Customer Reviews - A Walk In The Woods

A Walk In The Woods Reviews

Choke-on-your-coffee funny * Washington Post *
This is a seriously funny book -- Sue Townsend * The Sunday Times *
Short of doing it yourself, the best way of escaping into nature is to read a book like A Walk in the Woods... Mr Bryson has met this challenge with zest and considerable humor... a funny book, full of dry humor... the reader is rarely anything but exhilarated * The New York Times *
Entertaining and often illuminating -- Paul Johnson * Sunday Telegraph *
Irreverent, wildly funny, crowded with anecdotes and observation * Ideal Home *

GOR007064775
A Walk In The Woods: The World's Funniest Travel Writer Takes a Hike by Bill Bryson
Bill Bryson
Bryson
Used - Very Good
Paperback
Transworld Publishers Ltd
2015-08-13
336
1784161446
9781784161446
N/A
Book picture is for illustrative purposes only, actual binding, cover or edition may vary.
This is a used book - there is no escaping the fact it has been read by someone else and it will show signs of wear and previous use. Overall we expect it to be in very good condition, but if you are not entirely satisfied please get in touch with us.