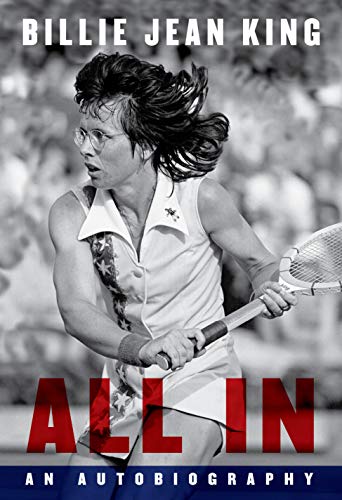 All In by Billie Jean King

'A constant role model in my life, Billie Jean King is a leading example of integrity in the face of adversity. The book's powerfully honest and unapologetic candor is a reflection of King's brilliant mark on the world and the glass ceilings she shattered' Serena Williams

An inspiring and intimate self-portrait of the champion of equality that encompasses her brilliant tennis career, unwavering activism, and an ongoing commitment to fairness and social justice.

In this spirited account, Billie Jean King details her life's journey to find her true self. She recounts her groundbreaking tennis career -- six years as the top-ranked woman in the world, twenty Wimbledon championships, thirty-nine grand-slam titles, and her watershed defeat of Bobby Riggs in the famous Battle of the Sexes. She poignantly recalls the cultural backdrop of those years and the profound impact on her worldview from the women's movement, the assassinations and anti-war protests of the 1960s, the civil rights movement, and, eventually, the LGBTQ+ rights movement.

She describes the myriad challenges she's hurdled -- entrenched sexism, an eating disorder, near financial ruin after being outed -- on her path to publicly and unequivocally acknowledging her sexual identity at the age of fifty-one. And she talks about how her life today remains one of indefatigable service. She offers insights and advice on leadership, business, activism, sports, politics, marriage equality, parenting, sexuality, and love. She shows how living honestly and openly has had a transformative effect on her relationships and happiness. Hers is the story of a pathbreaking feminist, a world-class athlete, and an indomitable spirit whose impact has transcended even her spectacular achievements in sports.

She changed how women athletes and women everywhere view themselves and she has given everyone, regardless of gender or sexual orientation, a chance to compete both on the court and in life * President Barack Obama *
A constant role model in my life, Billie Jean King is a leading example of integrity in the face of adversity. The book's powerfully honest and unapologetic candor is a reflection of King's brilliant mark on the world and the glass ceilings she shattered. It's a story about the personal strength, immense growth and undeniable greatness of one woman who fearlessly stood up to a culture trying to break her down -- Serena Williams

Compelling...All In is a brave and moving book, a must-read for tennis fans and a vivid slice of social history... its achievement is to sound like Billie Jean herself

* Melanie Reid, The Times *
A vivid and detailed account of her rise to sporting greatness and her struggles to attain equal treatment for women in a shockingly discriminatory sport...King revels in drama and tension...All In describes a life comprising one epic struggle after another, both on and off court * Fiona Sturges, Guardian *
This is a fascinating, energising, inspirational book from a woman who continues to set the standard for making a positive difference in the world * Clare Balding *
All In is the remarkable story of a true legend who came from humble beginnings, and went on to change the world. Billie Jean King is a champion in every sense, just as much a hero behind the scenes as she is before her massive crowds. Her powerful memoir is a compelling must read. Masterfully done, this book is for everyone -- Patricia Cornwell

[King's] new autobiography looks back on her success but also focuses on the
women's movement, civil rights, sexism, her eating disorder and being outed at the age of 51. Prepare to be inspired.

* CNN.com *
King describes the challenges she faced and the issues she continues to fight for in urgent and vivid terms, coalescing into a powerful self-portrait of an inspiring athlete and activist. * Time *
King not only helped change the paradigm for women's tennis players but also the marketplace for female athletes, and she played a significant role in the women's movement * New Yorker *
What a glorious autobiography in every way. Inspiring, emotional, gripping, heartbreaking, brave and maybe most of all, authentic, Billie Jean King writes with verve, insight, and tremendous wit. This is the story of a remarkable athlete and how she has changed our nation for the better. I cannot recommend this book strongly enough -- Harlan Coben
All In is a must-read about an authentic American hero, and one of the twentieth century's most consequential figures in the fight for gender equality and human rights -- Brenda Barrera * Booklist (starred review) *
Vivid throughout is King's passion for the game . . . and her obsessive will to win. She also fervidly speaks on contemporary issues from trans rights -- calling out the Women's Tennis Association for its insensitive treatment of such players as Renee Richards -- to gun control . . . The result is a lively and inspiring portrait of pressure-cooker play and political upheaval in tennis, from one of its most fascinating figures * Publishers Weekly (starred review) *
Billie Jean King has come not just a long way, but incalculably far. And now we know the contours of her journey. She is a national treasure and, in this smartly written and compulsively engaging memoir, we grasp how and why. By turns informative, entertaining, and downright fun, All In traces the arc of an extraordinary woman and her extraordinary impact -- Jon Wertheim, author of 'Glory Days'
Intimate and unvarnished * People *
Tennis legend Billie Jean King transformed the game... A recipient of the Presidential Medal of Freedom in 2009, Ms. King says she's 'still going full blast' to promote equality and inclusion in sports and beyond -- Emily Bobrow * Wall Street Journal *

-- Norma Clarke * Literary Review *
I love this book. This is more than an autobiography -- it's a manual for how to love yourself for who you are. Brutally honest and vulnerable at every level, here's the real Billie Jean King, champion of equality. When she was little, the world she wanted didn't exist. So she built it -- and best of all, she's still building it. Athletes fight for trophies; legends fight for others. You'll see. All In hits home -- Brad Meltzer, author of I am Billie Jean King
True to its title, All In is bracingly candid. Alongside the sporting and political battles, it tells of the eating disorder from which Ms. King suffered, a sexual assault she experienced as a teenager, and the whirlwind of being outed as a lesbian by a former lover in 1981. Ms. King does nothing by half-measures -- so much the better for readers, sport, and the many women she encouraged and empowered * The Economist *
It's easy work to be a former champion, easier still to be a legend - after all, the job requirements are nothing beyond showing up. But it's not easy to be an activist, and it's certainly not easy to commit your life to pushing the world closer to how you want it to be. All In reads as a manifesto, like Letters to a Young Poet with a heavy dash of bell hooks. . . . Her book is a powerful rallying cry, in a life full of them, for how she hopes we play the game after she's gone -- Caitlin Thompson * New York Times *
What resonates with me most deeply in All In are the little-known stories [King] tells of incidents that forged her character and steeled her resolve when she was 11 and 12, growing up in a working-class neighborhood in Long Beach, California, and trying to figure out her place in the world, too . . . At 77, King is not a former tennis champion on a late-life victory tour. She is a woman who approaches each day with an open heart and clear intention -- Liz Clarke * Washington Post *
All In is everything the title promises: An all-encompassing look at what it took for women to progress, not just in tennis, but in America and how women of color were constantly left behind . . . At its center, it's a story about pressure-to be the best, to win equal pay, to be a representative for queer athletes. But King understands that ultimately that pressure was a result of privilege and with All In, she's produced a book that grapples with both -- Shannon Melero * Jezebel *
King describes the challenges she faced and the issues she continues to fight for in urgent and vivid terms, coalescing into a powerful self-portrait of an inspiring athlete and activist * Time *
[King's] drive to overcome any obstacle thrown in front of her powers this memoir. In scene after scene, she knocks down the barriers before her and others - even as she secretly wrestles with her sexuality. Billie Jean King's strength, energy, and personality shine on every page of this gripping autobiography that will inspire tennis and non-tennis fans alike * Business Insider *

[King's] new autobiography looks back on her success but also focuses on the women's movement, civil rights, sexism, her eating disorder and being outed at the age of 51. Prepare to be inspired

* CNN.com *
BILLIE JEAN KING is the first female athlete to receive the Presidential Medal of Freedom. She is the founder of the Billie Jean King Leadership Initiative, the Women's Tennis Association, and the Women's Sports Foundation; she co-founded World Team Tennis; and she is part of the ownership group of the Los Angeles Dodgers. In 2006, the National Tennis Center was renamed the USTA Billie Jean King National Tennis Center. In 2020, the Fed Cup was renamed the Billie Jean King Cup, making it the first global team sports competition named for a woman. She was one of Life magazine's 100 Most Important Americans of the 20th Century, and in 2018 she received a Lifetime Achievement Award as part of the BBC Sports Personality of the Year Awards. She is an Adidas Global Ambassador, a past member of the board of the Elton John AIDS Foundation, and a past member of the President's Council on Fitness, Sports and Nutrition. She lives in New York.
NGR9780241430552
9780241430552
0241430550
All In: The Autobiography of Billie Jean King by Billie Jean King
Billie Jean King
New
Hardback
Penguin Books Ltd
20210909
496
N/A
Book picture is for illustrative purposes only, actual binding, cover or edition may vary.
This is a new book - be the first to read this copy. With untouched pages and a perfect binding, your brand new copy is ready to be opened for the first time
Trustpilot