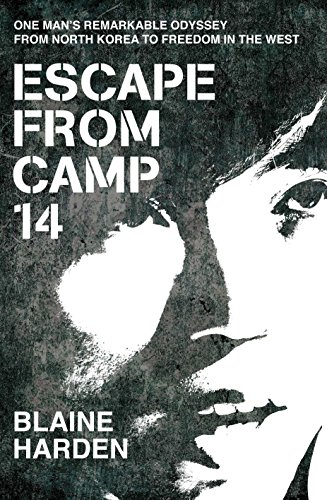 Escape from Camp 14 by Blaine Harden

Introducing the incredible story of Shin Dong-hyuk - the only person born in a North Korean gulag ever to escape . . .

Escape from Camp 14: One man's remarkable odyssey from North Korea to freedom in the West by Blaine Harden

Twenty-six years ago, Shin Dong-hyuk was born inside Camp 14, one of five sprawling political prisons in the mountains of North Korea. Located about 55 miles north of Pyongyang, the labor camp is a 'complete control district,' a no-exit prison where the only sentence is life.

No one born in Camp 14 or in any North Korean political prison camp has escaped. No one except Shin. This is his story.

A gripping, terrifying memoir with a searing sense of place, ESCAPE FROM CAMP 14 will unlock, through Shin, a dark and secret nation, taking readers to a place they have never before been allowed to go.

`This is a story unlike any other' Barbara Demick, author of Nothing to Envy: Ordinary Lives in North Korea

"With a protagonist born into a life of backbreaking labor, cutthroat rivalries, and a nearly complete absence of human affection, Harden''s book reads like a dystopian thriller. But this isn''t fiction-it''s the biography of Shin Dong-hyuk.--"Publishers Weekly"
"Mr. Shin''s story, at times painful to read, recounts his physical and psychological journey from a lifetime of imprisonment in a closed and unfeeling prison society to the joys and challenges of life in a free society where he can live like a human being."---Kongdan Oh, co-author of "The Hidden People of North Korea: Everyday Life in""the Hermit Kingdom"
"This is a story unlike any other... More so than any other book on North Korea, including my own, "Escape from Camp 14" exposes the cruelty that is the underpinning of Kim Jong Il''s regime. Blaine Harden, a veteran foreign correspondent from "The Washington Post", tells this story masterfully...The integrity of this book shines through on every page."---Barbara Demick, author of "Nothing to Envy: Ordinary Lives in North Korea"
"If you have a soul, you will be changed forever by Blaine Harden''s Escape from Camp 14...Harden masterfully allows us to know Shin, not as a giant but as a man, struggling to understand what was done to him and what he was forced to do to survive. By doing so, "Escape from Camp 14" stands as a searing indictment of a depraved regime and a tribute to all those who cling to their humanity in the face of evil."---Mitchell Zuckoff, "New York Times" bestselling author of "Lost in Shangri-La"
"Through the extraordinary arc of Shin''s life, Harden illuminates the North Korea that exists beyond the headlines and creates a moving testament to one man''s struggle to retrieve his own lost humanity."---Marcus Noland, co-author of "Witness to Transformation: ""Refugee Insights into North Korea"
Blaine Harden is a contributor to the Economist, based in Seattle, having completed a tour as the Washington Post's bureau chief in Tokyo. He is the prize-winning, acclaimed author of two books: Africa: Dispatches from a Fragile Continent and A River Lost: The Life and Death of the Columbia.
GOR003563724
9780230748736
0230748732
Escape from Camp 14: One man's remarkable odyssey from North Korea to freedom in the West by Blaine Harden
Blaine Harden
Used - Very Good
Hardback
Pan Macmillan
2012-03-29
256
N/A
Book picture is for illustrative purposes only, actual binding, cover or edition may vary.
This is a used book - there is no escaping the fact it has been read by someone else and it will show signs of wear and previous use. Overall we expect it to be in very good condition, but if you are not entirely satisfied please get in touch with us
Trustpilot