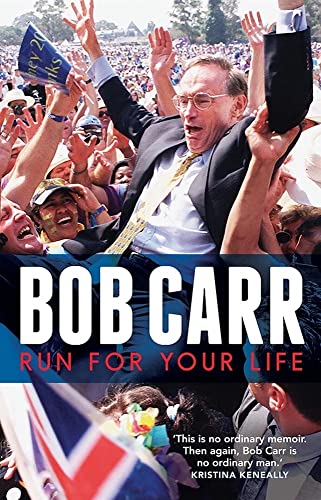 Run for Your Life
by Bob Carr

Run for Your Life Summary

Run for Your Life by Bob Carr

Political memoirs are often worthy but boring. Not Bob Carr's. One of Australia's leading politicians tears up the rules. His account plunges into the unintended consequences of politics, the twists and turns, loaded with furious self-criticism. He lashes himself for ignoring a cry from a cell in Goulburn Gaol and berates his failure to convert the country to reduced immigration and population growth.

Revealed, too, is his joy in saving nature, running good budgets, thrashing opponents, surviving against the odds. He talks about not having kids, about outsmarting the conservatives on law enforcement, about forcing the notorious Obeid out of cabinet. He tells how on a whim, in his last days in opposition, he forced a Royal Commission to upend the state's police, describes what he learnt from Neville Wran and how as a kid, from a working class suburb, he was inspired by Gough Whitlam. He celebrates the OlympicsaEURO"'the world's best'aEURO"without the games.

This 'anti-memoir' takes a critical look at the author: his failure to be ignited by sport (except on two notable occasions) and why in politics being true to your quirky self is good advice.

Professor the Hon Bob Carr was the longest continuously serving premier in the history of New South Wales. He then entered the federal Senate in 2012 and served as Australia's foreign minister for eighteen months. Since leaving politics Bob has led a distinguished career as an author and academic. He is the director of the Australia-China Relations Institute at UTS.

GOR009952116
Run for Your Life by Bob Carr
Bob Carr
Used - Very Good
Paperback
Melbourne University Press
2018-07-02
277
0522873138
9780522873139
N/A
Book picture is for illustrative purposes only, actual binding, cover or edition may vary.
This is a used book - there is no escaping the fact it has been read by someone else and it will show signs of wear and previous use. Overall we expect it to be in very good condition, but if you are not entirely satisfied please get in touch with us.