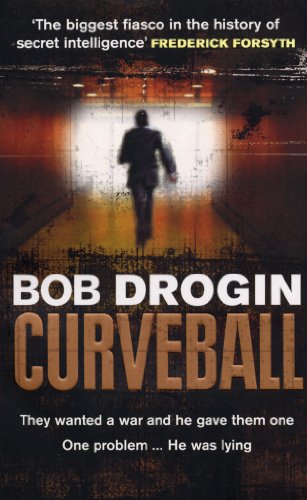 In Stock
£4.49
'Curveball' was the codename given to the mysterious defector whose first-hand evidence on Saddam's weapons of mass destruction proved vital in giving the Bush administration the excuse it needed to invade Iraq.
Very Good
Only 2 left

Curveball: Spies, Lies and the Man Behind Them: The Real Reason America Went to War in Iraq by Bob Drogin (Author)

'Curveball' was the codename given to the mysterious defector whose first-hand evidence on Saddam's weapons of mass destruction proved vital in giving the Bush administration the excuse it needed to invade Iraq. The only problem - this 'evidence' was nothing more than a pack of lies. Pulitzer Prize-winning journalist Bob Drogin has written the definitive account of the most notorious intelligence fiasco in US history, revealing how squabbling, arrogance and incompetence within the various intelligence agencies allowed one man's lies to spread higher and higher up the chain of authority, eventually reaching the White House itself. Breathlessly paced and shockingly revelatory, Curveball is an explosive true-life account of how honour and dishonesty amongst spies led to the UK and the US becoming embroiled in a catastrophic war.

"Curveball clarifies a large number of points hitherto only dimly discerned which, if true, explain the biggest fiasco in the history of secret intelligence over 500 years. Even if only half of this is true, those who led us into the Iraq war on the basis of a tissue of lies should be impeached and indicted" * Frederick Forsyth, author of The Day Of The Jackal, The Odessa File and The Afghan. *
"Curveball is the factual equivalent of Catch 22. It is impossible to read this book and then look at our world leaders without thinking , 'F*ck. Oh f*ck. Oh my God, oh f*ck.'" * Mark Thomas *
"Thank God for Bob Drogin. It's books like Curveball that give many of us a sliver of hope that we can turn things around" -- Michael Moore
"A story of willful blindness masquerading as secret intelligence worthy of Somerset Maugham or Graham Greene" * New York Times *
"Bob Drogin is an ace newspaper man, who raked through the muck of so-called intelligence that was used to justify America's invasion of Iraq -- and struck journalistic gold in this story of a con-man who told his CIA handlers exactly what they wanted to hear. If this twisted tale of deception and credulity could be read simply as a thrilling farce it would be pure delight -- but much more importantly, it is a history of our time" * Philip Gourevitch, author of We Wish to Inform You That Tomorrow We Will be Killed With Our Families: Stories from Rwanda *

Bob Drogin is a national security correspondent for the Los Angeles Times. He has won or shared multiple journalism awards, among them the Pulitzer Prize, the Robert F Kennedy Journalism Award and the George Polk Award. He has appeared on the BBC, CNN and many other media outlets. He lives in Silver Spring, Maryland, with his wife and two children.

GOR000855321
Curveball: Spies, Lies and the Man Behind Them: The Real Reason America Went to War in Iraq by Bob Drogin (Author)
Bob Drogin (Author)
Used - Very Good
Paperback
Ebury Publishing
2008-05-01
448
0091923042
9780091923044
N/A
Book picture is for illustrative purposes only, actual binding, cover or edition may vary.
This is a used book - there is no escaping the fact it has been read by someone else and it will show signs of wear and previous use. Overall we expect it to be in very good condition, but if you are not entirely satisfied please get in touch with us.