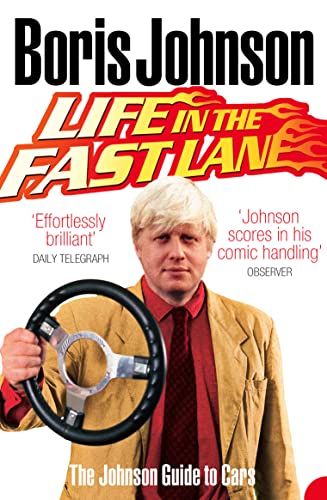 Life in the Fast Lane
by Boris Johnson

He comes, he sees, he plays with the gadgets...

Life in the Fast Lane Summary

Life in the Fast Lane: The Johnson Guide to Cars by Boris Johnson

He comes, he sees, he plays with the gadgets...

Boris Johnson has been behind the wheel of some of the world's fastest, most luxurious cars. He's taken the Jaguar XKR-R for a spin around a posh public school; roared through Islington in the AC Cobra V8; and spent a weekend tearing through the lanes of Sussex in the splendour of the Mercedes S55 AMG. Now he's going to reveal exactly what it was like.

Pondering the fundamental questions - What does it feel like to be overtaken by a female driver when you're behind the wheel of an Alfa Romeo? Can a car really precipitate a mid-life crisis? - Boris Johnson's hilarious dispatches from life in the fast lane will appeal to anyone who's found themselves behind the wheel of one of modern motoring's finer specimens. But it's not all glamour and gadgets. Because when he's not baiting his Holloway neighbours with the Rolls Royce Corniche, we see Boris trying, and failing, to get to grips with the Smart car, and attempting to flee Kosovo in a Fiat Uno.

Published together for the first time as a Paperback Original, these hilarious vignettes are vintage Boris: witty, candid and unique.

Life in the Fast Lane Reviews

Praise for `Have I Got Views for You':

'Johnson is a good-humoured, entertaining commentator, with an agreeably optimistic bent.' Observer

Praise for 'The Dream of Rome':

'I read it in two sittings, completely gripped. If Ruth Kelly has an ounce of sense, she will make this book compulsory reading for every 16-year old in the country.' Toby Young, New Statesman

'History comes alive only when written from the heart and Johnson's is full of swashbuckling japes, bloodthirsty yells and energetic sideswipes.' Craig Brown, Mail on Sunday

'Written with all the wit and zest that have helped to make him Britain's favourite celebrity MP.' Tom Holland, Daily Telegraph

`Such an entertaining read.' Daily Mail

`It is very funny and has, in short, all the idiosyncracies of its author.' Jeremy Paxman

Boris Johnson is the member of parliament for Henley-on-Thames and is a former editor of the Spectator magazine. He is married and lives in London and Oxfordshire.

GOR000742256
Life in the Fast Lane: The Johnson Guide to Cars by Boris Johnson
Boris Johnson
Used - Very Good
Paperback
HarperCollins Publishers
2007-06-04
320
0007260202
9780007260201
N/A
Book picture is for illustrative purposes only, actual binding, cover or edition may vary.
This is a used book - there is no escaping the fact it has been read by someone else and it will show signs of wear and previous use. Overall we expect it to be in very good condition, but if you are not entirely satisfied please get in touch with us.