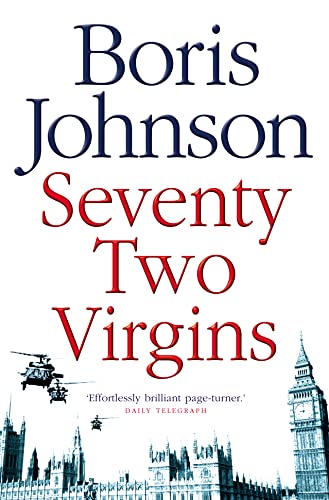 Seventy-Two Virgins is a comic political novel, with similar appeal to Stephen Fry or Ben Elton, written by one of Britain's most popular politicians. It is Boris Johnson's first novel and was widely acclaimed on publication.

Seventy-Two Virgins is a comic political novel, with similar appeal to Stephen Fry or Ben Elton, written by one of Britain's most popular politicians. It is Boris Johnson's first novel and was widely acclaimed on publication.

The American President, on a State Visit to Britain is giving a major address to a top-level audience in Westminster Hall. Ferocious security - with some difficulties in communication - is provided by a joint force of the United States Secret Service and Scotland Yard. The best sharpshooters from both countries are stationed on the roof of the Parliament buildings.

Then a stolen ambulance runs into trouble with the Parking Authorities. A hapless Member of Parliament, having mislaid his crucial pass, is barred from Westminster, his bicycle regarded as a potential lethal weapon. And a man going by the name of Jones, although born in Karachi, successfully slips through the barriers, and whole new ball game starts.

Despite the united efforts of the finest security minds, events begin to spin out of control. A remarkable new worldwide reality television show dominates the airwaves. And the most unlikely heroes emerge...

'At the centre of his first novel, a light comedy, is a terrorist plot of frightening ingenuity...the comedy is reminiscent of Tom Sharpe.' Sunday Times

'Johnson scores in his comic handling of those most sensitive issues...he succeeds in being charming and sincere...Boris Johnson has written a witty page-turner.' Observer

'Among the hilarious scenes of events and the wonderful dialogue which keeps the story moving at a cracking pace, Johnson uncovers some home truths...I can give no higher praise to this book than to say that I lapped it up at a single uproarious sitting.' Irish Examiner

'As an author, the Shadow Arts Minister is in a class of his own: ebullient, exhausting but irresistible.' Daily Mail

'fluent, funny material...the writing is vintage, Wodehousian Boris...it has been assembled with skill and terrific energy and will lift morale in the soul of many.' Evening Standard

'This is a comic novel, but Johnson is never far away from making serious points, which he leads us towards with admirable stealth.' Daily Telegraph

Boris Johnson is the editor of the Spectator, MP for Henley, writes a column for the Daily Telegraph and has just been appointed Shadow Arts Minister. He lives in London and Oxfordshire with his wife and their children.

GOR000484973
Seventy-Two Virgins by Boris Johnson
Boris Johnson
Used - Very Good
Paperback
HarperCollins Publishers
2005-05-03
336
0007198051
9780007198054
N/A
Book picture is for illustrative purposes only, actual binding, cover or edition may vary.
This is a used book - there is no escaping the fact it has been read by someone else and it will show signs of wear and previous use. Overall we expect it to be in very good condition, but if you are not entirely satisfied please get in touch with us.