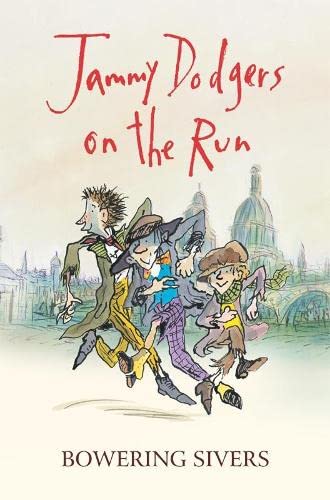 Jammy Dodgers on the Run
by Bowering Sivers

In Stock
£3.99
Watch out, guv! The irrepressible, irresistible Perkinski pick-pockets are out to steal your heart.
Like New Very Good
Only 3 left

Jammy Dodgers on the Run Summary

Jammy Dodgers on the Run by Bowering Sivers

First of two books set in the helter-skelter, "Lor', love a duck!" world of Victorian London. Featuring a cast of classic caricatures, some classic screwball comedy and a seriously scary storyline, this is entertaining and highly amusing, as well as being an accurate portrayal of life for London's rich and poor.

These fast-paced, funny books follow the capers of the three ragamuffin Perkinski brothers: Billy (5 yrs), Ned (10 yrs) and Jem (11 yrs) as they beg and borrow, steal and scrounge their way through the streets of London. These boys are proud of their professional pickpocketing skills, and know every jammy scam and dodge going.

In JAMMY DODGERS ON THE RUN, Billy goes missing, and his family fear the worst, thinking he's been taken by the notorious Walworth Terror. (In fact, Billy has been grabbed by an equally evil child snatcher who kidnaps children to work as chimney sweeps.) Jem and Ned come to the rescue of their little brother, and after various comic mishaps and scary situations the boys are reunited.

Born in Middlesex, Bowering Sivers has lived and worked in Zambia, Kenya and Canada - and spent a year in a caravan, travelling around Europe. She now lives in Eastbourne with her husband and two large dogs.

GOR000809812
Jammy Dodgers on the Run by Bowering Sivers
Bowering Sivers
Used - Very Good
Paperback
Pan Macmillan
2005-01-07
304
0330436635
9780330436632
N/A
Book picture is for illustrative purposes only, actual binding, cover or edition may vary.
This is a used book - there is no escaping the fact it has been read by someone else and it will show signs of wear and previous use. Overall we expect it to be in very good condition, but if you are not entirely satisfied please get in touch with us.