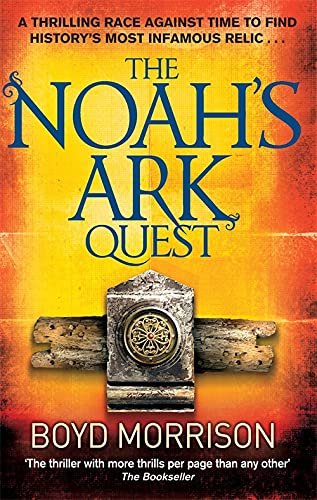 Do the remains of Noah's Ark really exist?

Before he dies, the father of ambitious young architect Dilara Kenner leaves her tantalising clues about the location of the legendary historical artefact - Noah's Ark.

The most fabled relic of all time, the search for Noah's Ark has obsessed many over the years. And when Dilara starts her quest - aided by former army engineer Tyler Locke - she rapidly becomes transfixed by the thought of discovering it.

But there are sinister forces gathering who have deadly reasons for wanting to be the first ones to get to the relic.

From a helicopter crash in the Atlantic, to a sinister sect in Arizona's Mojave desert, to the remote slopes of Mount Ararat, this thrilling page-turner blends nonstop action with fascinating historical fact.

Lightning-paced, chillingly real, here is a novel that will have you holding your breath until the last page is turned. One of the best debuts I've read this year * James Rollins *
The perfect blend of historical mysticism and clever, classical thriller plotting. Imagine the famed Ark rediscovered and reinvented to form the seeds of a modern day conspiracy. Boyd Morrison manages that flawlessly in this blisteringly-paced tale * Jon Land *
Like a thrill seeking ride in Disneyland, Morrison's thriller never pauses for breath... fast and furious with instant gratification * Daily Mail *
A bang-a-minute blockbuster * The Times *
After university, Boyd Morrison worked on a project for NASA and did a PhD in industrial engineering. When he moved to Seattle with his wife, he landed the dream job of working on Xbox games for Microsoft before becoming a full-time writer. He has been a Jeopardy! Champion and is a professional actor.
GOR002063674
9780751544152
0751544159
The Noah's Ark Quest by Boyd Morrison
Boyd Morrison
Used - Very Good
Paperback
Little, Brown Book Group
2010-08-19
576
N/A
Book picture is for illustrative purposes only, actual binding, cover or edition may vary.
This is a used book - there is no escaping the fact it has been read by someone else and it will show signs of wear and previous use. Overall we expect it to be in very good condition, but if you are not entirely satisfied please get in touch with us
Trustpilot