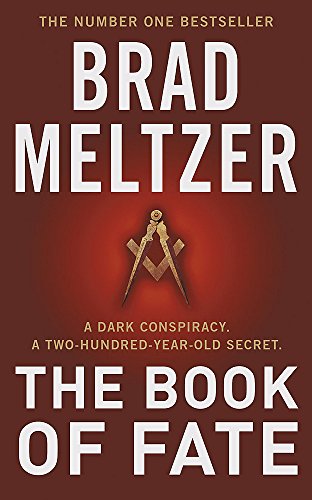 The Book of Fate
by Brad Meltzer

In Stock
£4.49
A relentlessly paced thriller with wide mainstream appeal by a top American bestseller with the appeal of a John Grisham for a new generation.
Like New Very Good Good
6 in stock

The Book of Fate Summary

The Book of Fate by Brad Meltzer

Eight years ago, a crazed assassin killed the President's oldest friend and left aide Wes Holloway permanently disfigured. Now an impossible sighting of the dead man forces Wes to confront the truth of what really happened on that terrible day.

A code invented by Thomas Jefferson and mysterious clues hidden by the Masons two hundred years ago may hold the answer.

But not everyone wants their secrets uncovered. Who are The Three? How much of Washington do they control? Wes is running out of time, and the assassin is closing in once more . . .

The Book of Fate Reviews

This white-knuckle thriller portrays cybertheft in the banking world in a beguiling concoction that keeps you hooked from start to finish * The Irish Times on THE MILLIONAIRES *
Breakneck . . . an action-packed read * Mail on Sunday on DEAD EVEN *
This is non-stop, well researched action that does not insult the intelligence. The scenarios are credible, the tension excruciating and the ending slaps you in the face. * Guardian on THE ZERO GAME *
This is a confident, character-driven, unpretentious, old-school thriller * Daily Telegraph *
Meltzer has earned the right to belly up to the bar with John Grisham, Scott Turow and David Baldacci * People *

Brad Meltzer is the author of the #1 New York Times bestseller, The Book of Fate, and five other bestselling thrillers: The Tenth Justice, Dead Even, The First Counsel, The Millionaires and The Zero Game. He is also one of the co-creators of the American TV show, Jack & Bobby, and is the writer of the #1 selling graphic novels, Identity Crisis and Justice League of America. He is also the host of Brad Meltzer's Decoded for the History Channel, the second season of which airs in October 2011. A graduate of the University of Michigan and Columbia Law School, he currently lives in Florida. Visit Brad's website, www.bradmeltzer.com; find him on Facebook at www.facebook.com/BradMeltzer; or follow him on Twitter at twitter.com/bradmeltzer.

GOR001428233
The Book of Fate by Brad Meltzer
Brad Meltzer
Used - Very Good
Paperback
Hodder & Stoughton General Division
2007-06-01
624
0340825065
9780340825068
N/A
Book picture is for illustrative purposes only, actual binding, cover or edition may vary.
This is a used book - there is no escaping the fact it has been read by someone else and it will show signs of wear and previous use. Overall we expect it to be in very good condition, but if you are not entirely satisfied please get in touch with us.