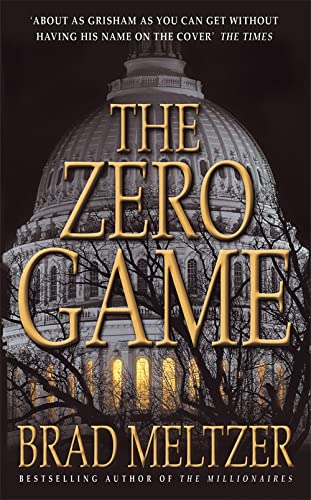 The Zero Game
by Brad Meltzer

In Stock
£4.49
Wake up to the bestselling potential of a young thriller writer set to give Grisham a run for his money.
Very Good
Only 2 left

The Zero Game by Brad Meltzer

Matthew Mercer and Harris Sandler are best friends who have plum jobs as senior staffers to well-respected congressmen. But after a decade in Washington, idealism has faded to disillusionment, and they're bored. Then one of them finds out about the clandestine Zero Game. It starts out as good fun - a simple wager between friends. But when someone close to them ends up dead, Harris and Matthew realise the game is far more sinister than they ever imagined - and that they're about to be the game's next victims. On the run, they turn to the only person they can trust: a sixteen-year-old Senate page who can move around the Capitol undetected. As a ruthless killer creeps closer, this idealistic page no only holds the key to saving their lives, but is also determined to redeem them in the process.

Come play the Zero Game - you can bet your life on it...

Brad Meltzer is the author of the #1 New York Times bestseller, The Book of Fate, and five other bestselling thrillers: The Tenth Justice, Dead Even, The First Counsel, The Millionaires and The Zero Game. He is also one of the co-creators of the American TV show, Jack & Bobby, and is the writer of the #1 selling graphic novels, Identity Crisis and Justice League of America. He is also the host of Brad Meltzer's Decoded for the History Channel, the second season of which airs in October 2011. A graduate of the University of Michigan and Columbia Law School, he currently lives in Florida. Visit Brad's website, www.bradmeltzer.com; find him on Facebook at www.facebook.com/BradMeltzer; or follow him on Twitter at twitter.com/bradmeltzer.

GOR000420926
The Zero Game by Brad Meltzer
Brad Meltzer
Used - Very Good
Paperback
Hodder & Stoughton
2004-09-13
480
0340825030
9780340825037
N/A
Book picture is for illustrative purposes only, actual binding, cover or edition may vary.
This is a used book - there is no escaping the fact it has been read by someone else and it will show signs of wear and previous use. Overall we expect it to be in very good condition, but if you are not entirely satisfied please get in touch with us.