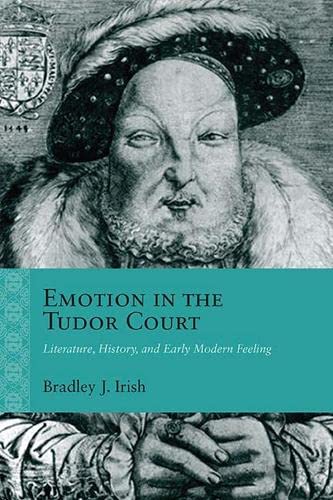 Emotion in the Tudor Court
by Bradley J. Irish

In Stock
£31.99
Emotion in the Tudor Court is a transdisciplinary work that uses Renaissance and modern scientific models of emotion to analyze the literary cultures of Tudor-era English court society, providing a robust new analysis of the emotional dynamics of sixteenth-century England.
Very Good
Only 3 left

Emotion in the Tudor Court Summary

Deploying literary analysis, theories of emotion from the sciences and humanities, and an archival account of Tudor history, Emotion in the Tudor Court examines how literature both reflects and constructs the emotional dynamics of life in the Renaissance court. In it, Bradley J. Irish argues that emotionality is a foundational framework through which historical subjects embody and engage their world, and thus can serve as a fundamental lens of social and textual analysis.

Spanning the sixteenth century, Emotion in the Tudor Court explores Cardinal Thomas Wolsey and Henrician satire; Henry Howard, Earl of Surrey, and elegy; Sir Philip Sidney and Elizabethan pageantry; and Robert Devereux, Earl of Essex, and factional literature. It demonstrates how the dynamics of disgust,envy, rejection, and dread, as they are understood in the modern affective sciences, can be seen to guide literary production in the early modern court.

By combining Renaissance concepts of emotion with modern research in the social and natural sciences, Emotion in the Tudor Court takes a transdisciplinary approach to yield fascinating and robust ways to illuminate both literary studies and cultural history.

Emotion in the Tudor Court Reviews

"Going beyond recent trends in cognitive and cultural literary study, Irish's rigorous and illuminating book integrates detailed historical scholarship about the Tudor court with current research in affective science. The result is a compelling and nuanced analysis with consequences for literary and cultural study not confined to Early Modern England." --Patrick Colm Hogan, author of What Literature Teaches Us About Emotion
"Irish has produced a fascinating and eloquent book on a topic of enduring interest to early modern scholars."
--Peter C. Herman, author of A Short History of Early Modern England: British Literature in Context

"Emotion in the Tudor Court rereads the intensely social literature of the Tudor court via up-to-date scientific and social-scientific research on emotion. In doing so, it moves beyond the Historicist project of defamiliarizing the past without ever lapsing into scientistic reductionism. Irish's smart, engaging book is at once a carefully researched study of Tudor literature and an innovative methodological blueprint for future socio-cultural histories of emotion." --Curtis Perry, author of Literature and Favoritism in Early Modern England
"In Emotion in the Tudor Court, Brad Irish adds powerfully to our understanding of the prevailing emotion scripts in that competitive, strife-filled court environment, examining the disgust, envy, rejection, and dread that motivated charismatic key players such as Wolsey, Surrey, Sidney, Leicester, and Essex. Literary scholars and Tudor historians alike will be surprised and enlightened by what they read here, finding they have much to learn about the nature of political emotions and the affective world of the Tudor court." --Gail Kern Paster, author of Humoring the Body: Emotions and the
Shakespearean Stage

BRADLEY J. IRISH is an assistant professor in the department of English at Arizona State University.

GOR009954012
Emotion in the Tudor Court: Literature, History, and Early Modern Feeling by Bradley J. Irish
Bradley J. Irish
Rethinking the Early Modern
Used - Very Good
Paperback
Northwestern University Press
2018-01-30
232
0810136392
9780810136397
N/A
Book picture is for illustrative purposes only, actual binding, cover or edition may vary.
This is a used book - there is no escaping the fact it has been read by someone else and it will show signs of wear and previous use. Overall we expect it to be in very good condition, but if you are not entirely satisfied please get in touch with us.