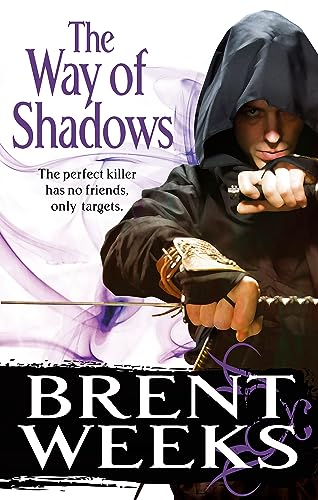 The Way Of Shadows
by Brent Weeks

Used Price
£4.49
New RRP £8.99
Free Shipping in the UK
The first instalment in an astonishing and epic tale of magic, violence and revenge.
Very Good Good

The Way Of Shadows Summary

The Way Of Shadows: Book 1 of the Night Angel by Brent Weeks

The perfect killer has no friends. Only targets.

For Durzo Blint, assassination is an art. And he is the city's most accomplished artist, his talents required from alleyway to courtly boudoir.

For Azoth, survival is precarious. Something you never take for granted. As a guild rat, he's grown up in the slums, and learned the hard way to judge people quickly - and to take risks. Risks like apprenticing himself to Durzo Blint.

But to be accepted, Azoth must turn his back on his old life and embrace a new identity and name. As Kylar Stern, he must learn to navigate the assassins' world of dangerous politics and strange magics - and cultivate a flair for death.

'Brent Weeks is so good it's beginning to tick me off' Peter V. Brett

'Weeks has a style of immediacy and detail that pulls the reader relentlessly into the story. He doesn't allow you to look away' Robin Hobb

'I was mesmerised from start to finish. Unforgettable characters, a plot that kept me guessing, non-stop action and the kind of in-depth storytelling that makes me admire a writers' work' Terry Brooks

Brent Weeks studied at Hillsdale College, before brief stints walking the earth like Caine from Kung-Fu, also tending bar, and corrupting the youth. (Not at the same time.) He started writing on napkins and, eventually, someone paid him for it. Brent doesn't own cats or wear a ponytail.

GOR003508708
The Way Of Shadows: Book 1 of the Night Angel by Brent Weeks
Brent Weeks
Night Angel
Used - Very Good
Paperback
Little, Brown Book Group
2011-06-30
672
0356500713
9780356500713
N/A
Book picture is for illustrative purposes only, actual binding, cover or edition may vary.
This is a used book - there is no escaping the fact it has been read by someone else and it will show signs of wear and previous use. Overall we expect it to be in very good condition, but if you are not entirely satisfied please get in touch with us.