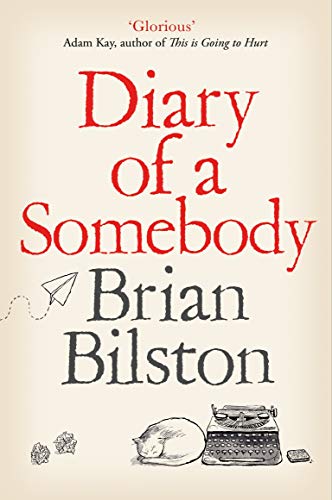 Diary of a Somebody
by Brian Bilston

In Stock
£5.49
A unique mix of poetry and diary by the unofficial Poet Laureate of Twitter, the enigmatic Brian Bilston, this suburban murder mystery will appeal to fans of Adrian Mole and The Curious Incident of the Dog in the Night-time.
Very Good
25 in stock

Diary of a Somebody Summary

Diary of a Somebody by Brian Bilston

'Nobody must find out about this unique gem, because I'm giving it to EVERYONE, and I want to appear clever and discerning.' - Dawn French

It's January 1st and Brian Bilston's life needs to change. His ex-wife has taken up with a new man, a motivational speaker and marketing guru to boot; he seems to constantly disappoint his long-suffering son; and at work he is drowning in a sea of spreadsheets and management jargon.

Brian's resolution is to write a poem every day; poetry will be his salvation. But there is an obstacle to his happiness in the form of Toby Salt, his arch nemesis in the Poetry Group and rival suitor to Liz, Brian's new poetic inspiration. When Toby goes missing, Brian is the number one suspect.

Part tender love story, part murder mystery, part coruscating description of a wasted life, and interspersed with some of the funniest poems about the mundane and the profound, Diary of a Somebody is a unique, original and hilarious novel.

'Glorious. I will be astonished if I read a more original, more inventive or funnier novel this year.' - Adam Kay, author of This is Going to Hurt.

Diary of a Somebody Reviews

Nobody must find out about this unique gem, because I'm giving it to EVERYONE -- Dawn French
Glorious. I will be astonished if I read a more original, more inventive or funnier novel this year. -- Adam Kay
Achingly funny. Without doubt it should win next year's Bollinger Everyman Wodehouse prize for the best comic novel, even if my own novel is in contention as well -- Jonathan Coe
If you like a) laughing or b) words which rhyme with each other, you will love Brian Bilston -- Richard Osman
Not since Victoria Wood has a writer squeezed so much hilarity from a biscuit. * The Oldie *
How do I laugh at thee? Let me count the ways . . . If you like sub-Carry On puns, clever parodies of famous poems and Wittgensteinian meditations on language, you'll love it * Mail on Sunday *
The midlife answer to Adrian Mole? It's a big comparison to make, in comic novel terms, but Brian Bilston - parodist and 'poet laureate of Twitter'- is worthy . . . Laugh. Cry. Cringe. * Stella Magazine, Sunday Telegraph *
He has a knack for playing with language but his poems are accessible, witty and touching . . . In fact I rather regretted reading it over just a couple of days - it would have been better to take longer and saver it. -- Kirsty McLuckie * The Scotsman Magazine *
A welcome reminder of the joy to be had when you put yourself in the hands of someone who knows their way round both a joke and a bittersweet narrative . . . Funny and ingenious * The Times *
In a similar way to Morrissey and John Cooper Clarke, [Bilston] has the ability to make the mundane both funny and beautiful - whether that's taking out the bins or procrastinating on Twitter . . . A must-read for anyone who is a fan of wordplay, puns, The Smiths and custard creams. -- Dominic Kearney * Irish News *
The English comic novel, whose death this year was announced prematurely, is actually alive, well and in the safe hands of Brian Bilston -- Jonathan Coe * The Times *
Highly original, genuinely funny and clever, with a gentle humanity in between the lines. Brian Bilston should be Poet Laureate -- John O'Farrell
Bilston is the greatest English anti-hero of our time. His poems have delighted people on Twitter for several years, and now he's treated us to this brilliant novel . . . This book has everything you want from a comic novel . . . Brian Bilston is real. And I love him * Spectator *
The pseudonymous Brian Bilston turns the base metal of comic verse into gold . . . Imagine a mash-up of John Cooper Clarke, Ed Reardon's Week and James Joyce, and you're about halfway there . . . Bilston is a magician with words . . . Read this novel in short bursts, pausing to savour its individual brilliancies * Guardian *
Brian Bilston is bringing poetry to the masses . . . topical, witty, thoughtful * Irish Times *
Brian Bilston is a laureate for our fractured times, a wordsmith who cares deeply about the impact his language makes as it dances before our eyes -- Ian McMillan
One of the funniest novels in years . . . It also has genuine heart - and scores of poems so witty and accomplished that, in the real world, their author would surely be as famous as, well . . . I predict that Brian Bilston will soon be * Reader's Digest *
Part John Cooper Clarke, part Frank Sidebottom . . . brilliant * Esquire *
Bilston is no stranger to crafting cleverly composed poetry * Huffington Post *
Word play, laugh-out-loud poems and the deft skewering of office life are part of the fun in this brilliant comic debut. -- Eithne Farry * Sunday Express *
In 1892, George and Weedon Grossmith published The Diary of a Nobody, now a classic of comic writing. In 1978, Christopher Matthew updated the idea. Now Brian Bilston brings us another Diary of a Somebody and it's as fun as its predecessors. -- William Hartston * Daily Express *
This fun, charming novel is a fine showcase for Bilston's irrepressible creativity . . . It's all done with wit, playfulness and a sense of amused wonder at the possibilities and idiosyncrasies of the English language, with the occasional groanworthy pun seeming like a price well worth paying. -- Alastair Mabbott * Herald *
Bilston has perfected his comic voice, which brings to mind a bitter man-child with spades of misanthropic charm and a dash of Alan Partridge-esque pedantry. This is a comic novel of the highest order. * Literary Review *
An original, imaginative and funny book. * Daily Mirror *
Part murder mystery, mainly great comic novel. * "What We're Reading", i *
Charming, funny and touching. -- Ian Rankin * First Printing *
The midlife answer to Adrian Mole? It's a big comparison to make, in comic novel terms, but Brian Bilston is worthy. In Diary of a Somebody, Brian makes a New Year's Resolution to write a poem a day for a year. Hilarious results ensue, as well as the disappearance of a poetry (and love) rival. Laugh. Cry. Cringe -- Stella Magazine * Sunday Telegraph *
Sparkling with wit, intelligence and humanity. -- Jonathan Coe * First Printing *

Brian Bilston is clouded in the pipe smoke of mystery.

The author of Diary of a Somebody, he has been described as the Banksy of poetry and Twitter's unofficial Poet Laureate. With over 50,000 followers, numbering J. K. Rowling, Roger McGough and Frank Cottrell Boyce amongst many, many other luminaries, Brian has become truly beloved by the Twitter community. His first collection, You Took the Last Bus Home, was published by Unbound.

He won the Great British Write Off competition in 2015 - and was the Poet in Residence for the World Economic Forum in 2016. There have been features on him on BBC Radio 4's Today programme, the BBC news website, the Irish Times, the Independent and the Smithsonian Magazine. Most of these features seem to have largely centred around his pipe.

GOR010253968
Diary of a Somebody by Brian Bilston
Brian Bilston
Used - Very Good
Paperback
Pan Macmillan
2020-01-09
288
1529005566
9781529005561
N/A
Book picture is for illustrative purposes only, actual binding, cover or edition may vary.
This is a used book - there is no escaping the fact it has been read by someone else and it will show signs of wear and previous use. Overall we expect it to be in very good condition, but if you are not entirely satisfied please get in touch with us.