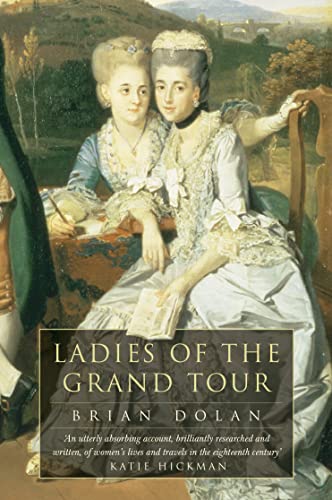 Ladies of the Grand Tour
by Brian Dolan

`An utterly absorbing account, brilliantly researched and written, of women's lives and travels in the 18th-century.' Katie Hickman

Ladies of the Grand Tour Summary

Ladies of the Grand Tour by Brian Dolan

`An utterly absorbing account, brilliantly researched and written, of women's lives and travels in the 18th-century.' Katie Hickman

According to `The Art of Governing A Wife' (1747), women in Georgian England were supposed to `lay up and save, look to the house; talk to few and take of all within'. However, some broke from these taboos and took up the previously male privilege of travelling to the Continent to develop mind, spirit and body.

Hearing of the delights of the Grand Tour from pioneering friends, increasing numbers of English ladies set off to sample foreign lands from which many returned apparently `the best informed and most perfect creatures'. For others the Grand Tour was an intellectual and romantic rite of passage, widening their knowledge of society, love and politics and inspiring a genre of literary fiction all of its own.

Brian Dolan leads us into the hearts and minds of the ladies through the stories, thoughts and court gossip recorded in their journals, letters and diaries.

Ladies of the Grand Tour Reviews

`What shines out in a finely researched and presented work is the uncommon fortitude of these early travellers.' Daily Telegraph

Brian Dolan is a young American historian who received his doctorate from Cambridge University in 1995. He has been a history lecturer in Sweden, London (at the Wellcome Institute) and is currently Wellcome Research Lecturer at the University of East Anglia.

GOR001167363
Ladies of the Grand Tour by Brian Dolan
Brian Dolan
Used - Very Good
Paperback
HarperCollins Publishers
2002-06-05
320
0007105339
9780007105335
N/A
Book picture is for illustrative purposes only, actual binding, cover or edition may vary.
This is a used book - there is no escaping the fact it has been read by someone else and it will show signs of wear and previous use. Overall we expect it to be in very good condition, but if you are not entirely satisfied please get in touch with us.