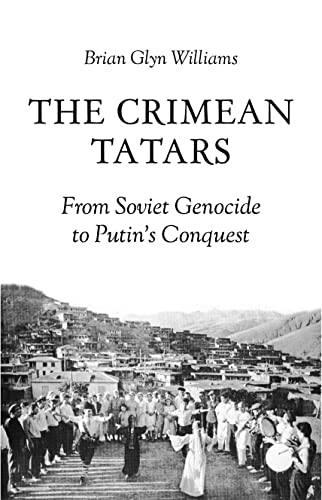 Used Price
£17.99
New RRP £30.00
Free Shipping in the UK
Definitive history of the Crimean Tatars, who have survived persecution through the generations
Very Good

The Crimean Tatars: From Soviet Genocide to Putin's Conquest by Brian Glyn Williams

The Russian annexation of the Crimea in March 2014 focused the world's attention on the Peninsula in ways not seen since the Crimean War. Thousands of Crimean Tatars clashed with pro-Russian militiamen in Simferopol, while Moscow has in turn stoked fears of jihadi terrorism among the overwhelmingly Muslim Tatars as retrospective justification for its invasion. The key thread in this book is the Crimean Tatars' changing relationship with their Vatan (homeland) and how this interaction with their natal territory changed under the Ottoman Sultans, Russian Tsars, Soviet Commissars, post-Soviet Ukrainian authorities and now Putin's Russia. Taking as its starting point the 1783 Russian conquest of the independent Tatar state known as the Crimean Khanate, Williams explains how the peninsula's native population, with ethnic roots among the Goths, Kipchak Turks and Mongols, was scattered across the Ottoman Empire. He also traces their later emigration and the radical transformation of this conservative tribal-religious group into a modern, politically mobilized, secular nation under Soviet rule.Stalin's genocidal deportation of the Crimean Tatars in 1944 to Uzbekistan and their almost messianic return to their cherished "Green Isle" in the 1990s are examined in detail, while the author's archival investigations are bolstered by his field research among the Crimean Tatar exiles in Uzbekistan and in their samozakhvat (self-seized) squatter camps and settlements in the Crimea.

'The Crimean Tatars is the first major study of this small but once-powerful nation's 300-year struggle for survival and will be of interest to historians, human rights advocates, genocide scholars, and political strategists as well as the general public. Brian Glyn Williams captures both the grandeur of the ancient Crimean Khanate and the horror of the tragedies that have hit the Tatars from the 1700s to the present day. Detailed and comprehensive, yet also engaging and fast-paced, readers will find this book both intriguing and moving.' * Walt Richmond, Professor of Russian, Occidental College, and author of The Northwest Caucasus: Past, Present, Future *
'Dispossessed, derided, Sovietized, persecuted, deported, returned home then reconquered: such is the harrowing history of the Crimean Tatars in the shadow of Russian domination. Richly researched, dispassionately written, Brian Glyn Williams' important new book tells the unforgettable story of one of Europe's most resilient but least remembered communities.' * Nile Green (UCLA), author of Terrains of Exchange: Religious Economies of Global Islam *

Brian Glyn Williams is Professor of Islamic History at the University of Massachusetts, Dartmouth.

GOR007534061
The Crimean Tatars: From Soviet Genocide to Putin's Conquest by Brian Glyn Williams
Brian Glyn Williams
Used - Very Good
Paperback
C Hurst & Co Publishers Ltd
2015-11-05
320
1849045186
9781849045186
N/A
Book picture is for illustrative purposes only, actual binding, cover or edition may vary.
This is a used book - there is no escaping the fact it has been read by someone else and it will show signs of wear and previous use. Overall we expect it to be in very good condition, but if you are not entirely satisfied please get in touch with us.