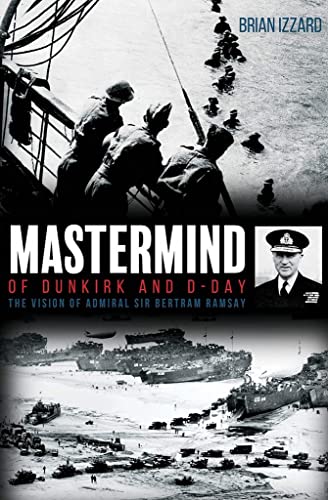 Mastermind of Dunkirk and D-Day
by Brian Izzard

Used Price
£15.49
New RRP £25.00
Free Shipping in the UK
The first modern biography of Bertram Ramsay, the man who masterminded the Dunkirk evacuation and the D-Day landings.
Very Good

Mastermind of Dunkirk and D-Day Summary

Mastermind of Dunkirk and D-Day: The Vision of Admiral Sir Bertram Ramsay by Brian Izzard

This is the first major biography of Admiral Sir Bertram Ramsay in fifty years. Ramsay masterminded the evacuation of the British Expeditionary Force from Dunkirk in 1940. Initially, it was thought that 40,000 troops at most could be rescued. But Ramsay's planning and determination led to some 338,000 being brought back to fight another day, although the Royal Navy and the Merchant Navy paid a high price in ships and men. Ramsay continued to play a crucial role in the conduct of the Second World War - the invasion of Sicily in 1943 was successful in large part due to his vision, and he had a key role in the planning and execution of the D-Day invasion - coordinating and commanding the 7,000 ships that delivered the invasion force onto the beaches of Normandy. After forty years in the Royal Navy he was forced to retire in 1938 after falling out with a future First Sea Lord but months later, with war looming, he was given a new post. However he was not reinstated on the Active List until April 1944, at which point he was promoted to Admiral and appointed Naval Commander-in-Chief for the D-Day naval expeditionary force. Dying in a mysterious air crash in 1945, Ramsay's legacy has been remembered by the Royal Navy but his key role in the Allied victory has been widely forgotten. After the war ended his achievements ranked alongside those of Sir Winston Churchill, Field Marshal Viscount Alanbrooke, Field Marshal Viscount Montgomery and General Dwight Eisenhower, yet he never received the public recognition he deserved. Brian Izzard's new biography of Ramsay puts him and his work back centre-stage, arguing that Ramsay was the mastermind without whom the outcome of both Dunkirk and D-Day - and perhaps the entire war - could have been very different.

Mastermind of Dunkirk and D-Day Reviews

''This is a fascinating... account of a great admiral's life and times.'' * Warships International *
This excellent modern biography is long overdue, superbly written and will hopefully help restore the worthy prominence owed to one of Britain's greatest naval officers. * Britain at War Magazine *
Brian Izzard has written a fascinating and complete biography that is a delight to read of the man described as the "mastermind of amphibious operations". Very highly recommended. * Warship World 09/07/2020 *
Brian Izzard has written a splendid, much needed and long overdue full biography of Admiral Ramsay, with access to far more material, significant amounts of it formerly classified, than that available to WS Chalmers with his much earlier biography, written sixty years ago. But the book also includes an excellent history of Operation Dynamo, the amazing story of the Dunkirk evacuation, it is the best account that I have read of that incredible strategic rescue of the BEF (British Expeditionary Force). * Scuttlebutt 12/06/2020 *
This reviewer is firmly of the opinion that many of the best histories are written by journalists or former journalists. This book is no exception. The author is a journalist of vast experience who also happens to write great military history. He certainly has a talent for weaving a fascinating and readable tale ... [a] quite personal but very inspiring biography. * Baird Maritime 11/06/2020 *

Brian Izzard was a Fleet Street journalist, feature writer and news sub-editor for many years, working latterly on the Daily Express and the Sunday Express. This is his fifth book.

GOR010842975
Mastermind of Dunkirk and D-Day: The Vision of Admiral Sir Bertram Ramsay by Brian Izzard
Brian Izzard
Used - Very Good
Hardback
Casemate Publishers
2020-03-15
288
1612008380
9781612008387
N/A
Book picture is for illustrative purposes only, actual binding, cover or edition may vary.
This is a used book - there is no escaping the fact it has been read by someone else and it will show signs of wear and previous use. Overall we expect it to be in very good condition, but if you are not entirely satisfied please get in touch with us.