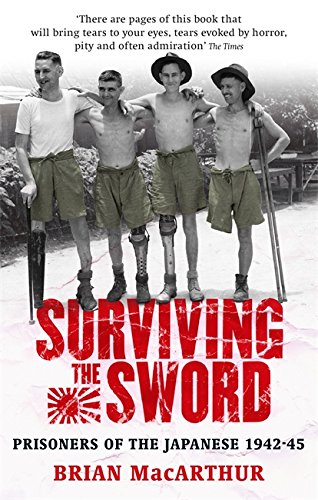 Surviving The Sword
by Brian MacArthur

In Stock
£3.59
* Magisterial history of the Japanese prisoner-of-war experience, a gut-wrenching narrative that resonates to this day.
Very Good Good
6 in stock

Surviving The Sword: Prisoners of the Japanese 1942-45 by Brian MacArthur

Many of the prisoners held by the Japanese during the WWII were so scarred by their experiences that they could not discuss them even with their families. They believed that their brutal treatment was, literally, incomprehensible. But some prisoners were determined that posterity should know how they were starved and beaten, marched almost to death or transported on 'hellships', used as slave labour - most notoriously on the Burma-Thailand railway - and how thousands died from tropical diseases. They risked torture or execution to draw and write diaries that they hid wherever they could, sometimes burying them in the graves of lost comrades.
The diaries tell of inhumanity and degradation, but there are also inspirational stories of courage, comradeship and compassion. When men have unwillingly plumbed the depths of human misery, said one prisoner, the artist Ronald Searle, they form a silent understanding of what solidarity, friendship and kindness to others can mean. The diaries and interviews with surviving prisoners drawn on in SURVIVING THE SWORD will tell a new generation about that solidarity, friendship and kindness.

Brian MacArthur has made a significant contribution to the literature of the war in the Far East, which is still much less known to us than the matching struggle in Europe * SUNDAY TELEGRAPH *
MacArthur does justice to these men. He lays bare the horrors, so awful that, reading of them, one is amazed that there were any survivors. But he also pays tribute to the courage the vast majority showed in their determination not to die, and especially * Allan Massie, TIMES *
Commendably, in this first essay into military history, he has allowed the voices of these veterans of the Far East Prisoners of War Association to speak to us directly across the 60-year void; they echo from the mouth of a tropical hell with an awful eloquence . . . a deeply moving read * John Crossland, SUNDAY TIMES *
Brian MacArthur's compelling story of the extraordinary suffering of British, Australian, Dutch and American prisoners of the Japanese provides excruciating detail . . . the capacity of men to inflict misery on each other is almost balanced by their abil * TLS *

Brian MacArthur is associate editor of THE TIMES. He was founder editor of TODAY and THE TIMES HIGHER EDUCATION SUPPLEMENT and has been a journalist for forty years. He is the editor of three books on journalistic themes for Penguin.

GOR001211129
Surviving The Sword: Prisoners of the Japanese 1942-45 by Brian MacArthur
Brian MacArthur
Used - Very Good
Paperback
Little, Brown Book Group
2006-02-02
512
0349119376
9780349119373
N/A
Book picture is for illustrative purposes only, actual binding, cover or edition may vary.
This is a used book - there is no escaping the fact it has been read by someone else and it will show signs of wear and previous use. Overall we expect it to be in very good condition, but if you are not entirely satisfied please get in touch with us.