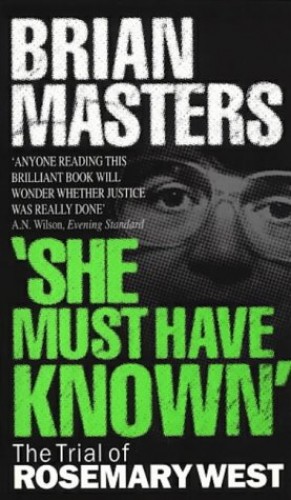 "She Must Have Known"
by Brian Masters

In Stock
£7.49
In attending the trial of Rosemary West, and using interviews, the author presents a study of the sexual obsession that led to the measured killing of 12 women and girls by Fred West. It looks at how and why West was driven to serial killing, turning 25 Cromwell Street into a burial ground.
Very Good Good Well Read
Only 3 left

"She Must Have Known" Summary

"She Must Have Known": The Trial Of Rosemary West by Brian Masters

Frederick West cheated everybody when he hung himself on New Year's Day 1995. Was this a sign of overwhelming guilt? Was West criminally insane or merely a sexual sadist of the worst kind? Brian Masters sets out to answer these questions. Attending the Rosemary West trial on a daily basis, Masters has come up with a penetrating study of the sexual obsession that led to the measured killing of twelve women and girls. In the wake of the horrific detail of murder, sadism and torture that has come to light in the last few months, Masters, from his privileged courtroom vantage point, looks closely at how and why ordinary human beings were driven to serial killing of the most devious kind, and how an evil psychopath was able to ensnare so many in a web of unseeing complicity. He unravels with particular precision the legal means used to bring the whole matter to trial and weighs the evidence coolly and objectively. Brian Masters has established his reputation as an authority on the criminal and psychopathic mind. This is his highly reasoned and psychologically acute look at what has become Britain's serial-killer trial of the century.

"She Must Have Known" Reviews

"'Anyone reading this brilliant book will wonder whether justice was really done'" -- A.N. Wilson * Evening Standard *
"'Brian Masters is a very fine writer who consistently questions the nature of justice and how it is administered'" -- Minette Walters
"'By far the most interesting book on the subject...profound and illuminating'" -- Anthony Daniels * Sunday Telegraph *
"'Like the author's previous books on Nilsen and Dahmer, it sets out the facts in detail, so the reader can make up his own mind. A classic of criminological literature'" -- Colin Wilson * Spectator *
"'Masters has marshalled his arguments with such skill that one wonders why he is not making his fortune at the bar...another serious, compelling account of a serial killer'" -- Anthony Storr * The Sunday Times *

Brian Masters has written over twenty books on subjects as diverse as French literature, the dukedoms in Great Britain, E.F. Benson and Marie Corelli. His groundbreaking study of mass murderer Dennis Nilsen, Killing for Company, won the Crime Writers' Association Gold Dagger for Non-Fiction in 1985. He is the author of the critically acclaimed The Shrine of Jeffrey Dahmer and The Evil that Men Do. He is also highly regarded for his journalism, in particular his weekly column in the Mail on Sunday's magazine Night and Day. He lives in France.

GOR000832330
"She Must Have Known": The Trial Of Rosemary West by Brian Masters
Brian Masters
Used - Very Good
Paperback
Transworld Publishers Ltd
1997-06-05
432
0552545368
9780552545365
N/A
Book picture is for illustrative purposes only, actual binding, cover or edition may vary.
This is a used book - there is no escaping the fact it has been read by someone else and it will show signs of wear and previous use. Overall we expect it to be in very good condition, but if you are not entirely satisfied please get in touch with us.