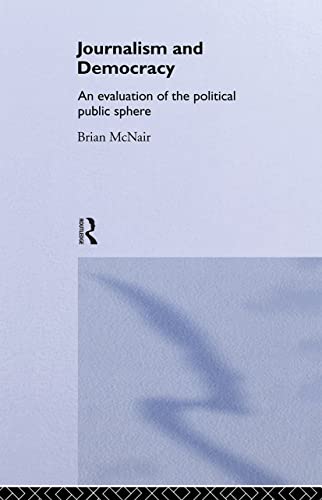 Journalism and Democracy
by Brian McNair

In Stock
£5.49
Argues that the media are not 'dumbing down', but that the quantity of political information in mass circulation has expanded hugely, while different media have adapted to provide accessible and thorough coverage.
Very Good
Only 1 left

Journalism and Democracy: An Evaluation of the Political Public Sphere by Brian McNair

The public sphere is said to be in crisis. Dumbing down, tabloidisation, infotainment and spin are alleged to contaminate it, adversely affecting the quality of political journalism and of democracy itself. There is a pervasive pessimism about the relationship between the media and democracy, and widespread concern for the future of the political process.
Journalism and Democracy challenges this orthodoxy, arguing instead for an alternative, more optimistic evaluation of the contemporary public sphere and its contribution to the political process. Brian McNair argues not only that the quantity of political information in mass circulation has expanded hugely in the late twentieth century, but that political journalism has become steadily more rigorous and effective in its criticism of elites, more accessible to the public, and more thorough in its coverage of the political process.
Journalism and Democracy combines textual analysis and extensive in-depth interviews with political journalists, editors, presenters and documentary makers. In separate chapters devoted to the political news agenda, the political interview, punditry, public access media and spin doctoring, McNair considers whether dumbing down is a genuinely new trend in political journalism, or a kind of moral panic, provoked by suspicion of mass involvement in culture.

Brian McNair is Reader in the Department of Film and Media Studies at Stirling University and a member of the Stirling Media Research Institute. He is the author of News and Journalism in the UK (3rd edition, 1999), An Introduction to Political Communication (2nd edition, 1999) and The Sociology of Journalism (1998).

1. Journalism and Democracy: the debate 2. The Political Public Sphere: an anatomy 3. Policy, Process, Performance and Sleaze; an evaluation of the political news agenda 4. The Interpretative Moment: the journalism of commentary and analysis 5. The Interrogative Moment: the British political interview 6. The Sound of the Crowd; access and the political media 7. 'Spin, whores, spin!'; the demonisation of political public relations 8. The Media and Politics, 1992-97 9. Political Journalism and the Crisis of Mass Representation

GOR003544437
Journalism and Democracy: An Evaluation of the Political Public Sphere by Brian McNair
Brian McNair
Used - Very Good
Paperback
Taylor & Francis Ltd
1999-11-25
224
0415212804
9780415212809
N/A
Book picture is for illustrative purposes only, actual binding, cover or edition may vary.
This is a used book - there is no escaping the fact it has been read by someone else and it will show signs of wear and previous use. Overall we expect it to be in very good condition, but if you are not entirely satisfied please get in touch with us.