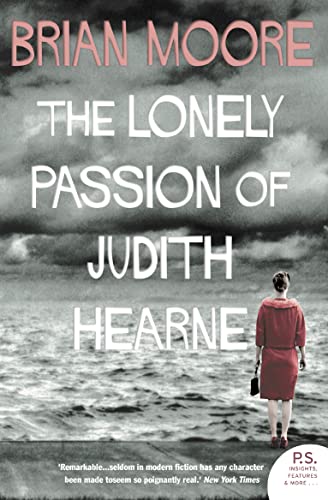 The Lonely Passion of Judith Hearne
by Brian Moore

A timeless classic dealing with the complexity and hardships of relationships, addiction and faith.

A timeless classic dealing with the complexity and hardships of relationships, addiction and faith.

Judith Hearne, a Catholic middle-aged spinster, moves into yet another bed-sit in Belfast. A socially isolated woman of modest means, she teaches piano to a handful of students to pass the day. Her only social activity is tea with the O'Neill family, who secretly dread her weekly visits.

Judith soon meets wealthy James Madden and fantasises about marrying this lively, debonair man. But Madden sees her in an entirely different light, as a potential investor in a business proposal. On realising that her feelings are not reciprocated, she turns to an old addiction - alcohol. Having confessed her problems to an indifferent priest, she soon loses her faith and binges further. She wonders what place there is for her in a world that so values family ties and faith, both of which she is without.

'Remarkable...seldom in modern fiction has any character been revealed so completely or been made to seem so poignantly real.' New York Times

'I can't think of another living male novelist who writes about women with such sympathy and understanding.' Times Literary Supplement

'Moore is surely one of the most versatile and compelling novelists writing today.' Daily Telegraph

'A powerful haunting story by a young Irish-Canadian who knows the meaning not only of loneliness, but that of compassion as well.' New York Times

'An almost classic example of the power given by unity of theme...Moore reveals all the qualities of a born novelist.' Sunday Times

`From his first to his last novel, Moore has an uncanny ability to imagine his way into the emotions and sexuality of his characters...there aren't many writers who do this comparably well - Flaubert, Chekhov, Julian Barnes, William Trevor come to mind.' Hermione Lee

`Brian Moore leads the field with a style that can only be called immaculate.' Guardian

`Brian Moore's versatility, his lifelong refusal to keep writing the same book over again, is too much taken for granted. He writes simply and economically, but with a true generosity of vision.' Observer

Brian Moore, whom Graham Greene called his `favourite living novelist', was born in Belfast in 1921 and was educated there at St Malachy's College. He served during the latter part of the Second World War in North Africa, Italy and France. After the war he worked for the United Nations in Europe before emigrating to Canada in 1948, where he became a journalist and adopted Canadian citizenship. He spent some time in New York before moving to California, where he lived up until his death in January 1999.

GOR001126829
The Lonely Passion of Judith Hearne (Harper Perennial Modern Classics) by Brian Moore
Brian Moore
Harper Perennial Modern Classics
Used - Very Good
Paperback
HarperCollins Publishers
2007-07-16
256
0007255616
9780007255610
N/A
Book picture is for illustrative purposes only, actual binding, cover or edition may vary.
This is a used book - there is no escaping the fact it has been read by someone else and it will show signs of wear and previous use. Overall we expect it to be in very good condition, but if you are not entirely satisfied please get in touch with us.