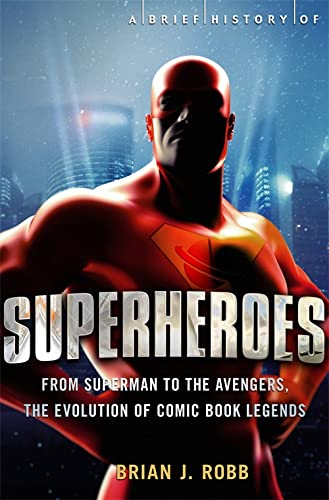 A Brief History of Superheroes
by Brian Robb

New Price
£8.99
Free Shipping in the UK
A century of reinvention, from Superman in the Great Depression to the blockbuster movies of today
New£8.99

A Brief History of Superheroes Summary

A Brief History of Superheroes: From Superman to the Avengers, the Evolution of Comic Book Legends by Brian Robb

A fascinating written exploration of the superhero phenomenon, from its beginnings in the depths of Great Depression to the blockbuster movies of today.

For over 90 years, superheroes have been interrogated, deconstructed, and reinvented. In this wide-ranging study, Robb looks at the diverse characters, their creators, and the ways in which their creations have been reinvented for successive generations. Inevitably, the focus is on the United States, but the context is international, including an examination of characters developed in India and Japan in reaction to the traditional American hero.

Sections examine: the birth of the superhero, including Superman, in 1938; the DC family (Superman, Batman, Wonder Woman and The Justice Society/League of America), from the 1940s to the 1960s; the superheroes enlistment in the war effort in the 1940s and 50s; their neutering by the Comics Code; the challenge to DC from the Marvel family (The Fantastic Four, Spider-Man, and The X-Men), from the 1960s to the 1980s; the superhero as complex anti-hero; superheroes deconstructed in the 1980s (The Watchmen and Frank Miller's Batman), and their politicization; independent comic book creators and new publishers in the 1980s and 90s; superheroes in retreat, and their rebirth at the movies in blockbusters from Batman to Spider-Man and The Avengers.

A Brief History of Superheroes Reviews

Praise for the author's Brief Guide to Star Trek

You won't find star dates or names of redshirts killed off in the fourth episode in the third season of the original series (trick question, they were unnamed). What you will find is an honest and excellent source of information about the work that went into the series that is still surviving after almost 50 years.

Praise for the author's Brief Guide to Star Wars

Well-written and easy to read . . . I recommend this book to any Star Wars fan.

NGR9781472110558
A Brief History of Superheroes: From Superman to the Avengers, the Evolution of Comic Book Legends by Brian Robb
Brian Robb
Brief Histories
New
Paperback
Little, Brown Book Group
2014-05-29
304
1472110552
9781472110558
N/A
Book picture is for illustrative purposes only, actual binding, cover or edition may vary.
This is a new book - be the first to read this copy. With untouched pages and a perfect binding, your brand new copy is ready to be opened for the first time.