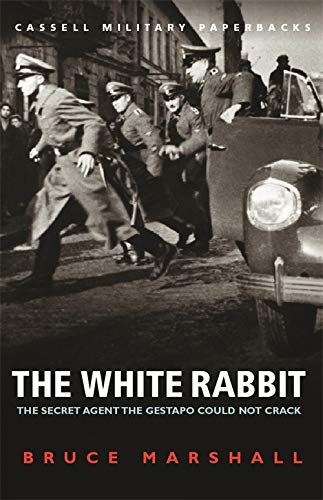 The White Rabbit
by Bruce Marshall

In Stock
£3.99
The harrowing, and inspiring, story of the capture of one of Britain's top SOE agents in World War Two, his refusal to crack under the most horrific torture, and his final imprisonment in a concentration camp.
Very Good Good Well Read
20 in stock

The White Rabbit by Bruce Marshall

The harrowing, and inspiring, story of the capture of one of Britain's top SOE agents in World War Two, his refusal to crack under the most horrific torture, and his final imprisonment in a concentration camp.

'The White Rabbit' was the code name of Wing Commander F.F.E. Yeo-Thomas when he parachuted into France in 1942 as a member of the Special Operations Executive with the Resistance. For the next eighteen months he was responsible for organising all the separate factions of the French Resistance into one combined 'secret army'. On three separate missions into occupied France he met with the heads of Resistance movements all over the country, and he spoke personally with Winston Churchill in order to ensure they were properly supplied.

His capture by the Gestapo in March 1944 was therefore a terrible blow for the Resistance movement. For months he was submitted to the most horrific torture in an attempt to get him to spill his unparalleled knowledge of the Resistance, but he refused to crack. Finally he was sentenced to death, and sent to Buchenwald, one of the most infamous German concentration camps. The story of his endurance, and survival, is an inspiring study in the triumph of the human spirit over the most terrible adversity.

Bruce Marshall was a prolific Scottish writer who wrote fiction and non-fiction books on a wide range of topics and genres.

GOR001208473
The White Rabbit by Bruce Marshall
Bruce Marshall
Cassell Military Paperbacks
Used - Very Good
Paperback
Orion Publishing Co
2000-12-07
272
0304356972
9780304356973
N/A
Book picture is for illustrative purposes only, actual binding, cover or edition may vary.
This is a used book - there is no escaping the fact it has been read by someone else and it will show signs of wear and previous use. Overall we expect it to be in very good condition, but if you are not entirely satisfied please get in touch with us.