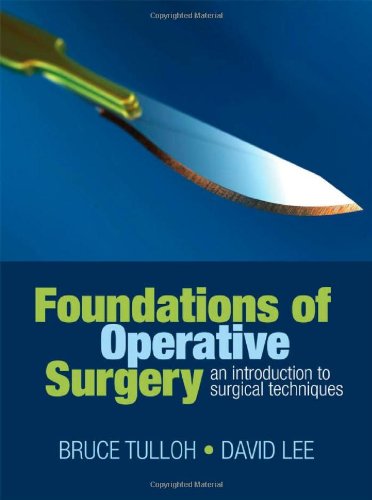 Foundations of Operative Surgery: An Introduction to Surgical Techniques by Bruce Tulloh

Technical expertise in the operating theatre remains a hallmark of surgical practice. Theatre etiquette and instrument handling skills are highly specific to the specialty of surgery, and trainees need to quickly become familiar with them. This book introduces operative technique in an original way. It first discusses the roles and responsibilities of the surgical trainee and explains some the unwritten rules of behaviour in the operating theatre. It then brings a unique approach to teaching operative surgery by describing operations as a series of generic manoeuvres which, when mastered and put together in the correct order, will allow any procedure to be performed - and prove useful across subspecialty boundaries. This approach is illustrated using clear diagrams and full colour photographs. It is further enhanced through a free DVD comprising 55 high quality video clips taken from live operating sessions which illustrate the various techniques described inside.

An excellent book Highly original and clearly presented Medical Book Awards This book addresses the importance of understanding fundamental aspects of surgical practice by its target audience of specialty trainees and foundation doctors with surgical interest [and] coherently describes aspects of surgical etiquette, illustrates elementary surgical techniques in excellent detail, and is a valuable resource for those in the early stages of surgical training. Surgeons News

Mr Bruce Tulloh completed general surgical training at St Vincent's Hospital, Melbourne, in 1989, then pursued a further three years' post-Fellowship training in both Melbourne and the UK. He was then appointed as one of two general surgeons in Echuca, a town of 12,000 people in northern Victoria, Australia, where he worked for ten years across the full breadth of rural general surgery and promoted the teaching of operative surgery to junior trainees on rotation from Melbourne teaching hospitals. He moved to Scotland in 2002 and remains there following appointment to the Royal Infirmary of Edinburgh, where he works in the Upper Gastro-intestinal Surgery Unit with major interests in complex laparoscopic surgery and surgical training. After completing basic and higher surgical training in Edinburgh, Mr David Lee was appointed Senior Lecturer in Durban, South Africa in 1980. He was appointed Consultant General Surgeon with an interest in Endocrinology, Royal Infirmary, Edinburgh in 1982, and retired from clinical practice in 2006. He was elected to the Council of Royal College of Surgeons of Edinburgh in 1988 and took charge of the Examinations Committee for a
four year period.

GOR004711018
Foundations of Operative Surgery: An Introduction to Surgical Techniques by Bruce Tulloh
Bruce Tulloh
Used - Very Good
Hardback
Oxford University Press
2007-11-22
168
0199228663
9780199228669
Commended for Royal Society of Medicine Prize 2008
Book picture is for illustrative purposes only, actual binding, cover or edition may vary.
This is a used book - there is no escaping the fact it has been read by someone else and it will show signs of wear and previous use. Overall we expect it to be in very good condition, but if you are not entirely satisfied please get in touch with us.