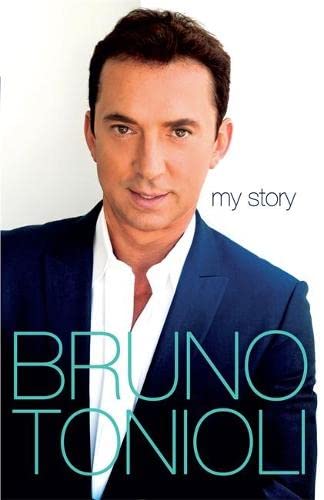 Bruno My Story by Bruno Tonioli

Bruno My Story by Bruno Tonioli

Bruno Tonioli is the unmistakably flamboyant Italian who has entertained Strictly Come Dancing's countless fans for very nearly a decade. Bruno lights up every episode of the smash UK show - as well as Dancing in the Stars in the USA - with his high-energy, warm and deliciously humourous critiques of the celebrity contestants. For the very first time, fans can now read all about this highly engaging and life-affirming man who has rapidly established himself as a British national treasure.

Born to staunchly working class parents and raised in a very conservative Catholic village in northern Italy, Tonioli knew from the age of 8 that he was not constructed like many of the other boys he played with. Forced to train for a "proper job" as a bank clerk, Bruno was eventually to find a way to express his creative abilities and ended up a dancer and then a renowned choreographer, arriving in Britain in the early 1980s. His career took off and he found himself immersed in the buzz and hedonism of the vibrant 80s scene, rubbing shoulders with the great and the good from the worlds of theatre, music and film. Wonderfully rich and colourful stories from this era abound.

For Bruno, the last decade has - of course - been very largely about the Strictly phenomenon, and his memoirs do not disappoint in taking fans behind the scenes to witness for themselves the magical ingredients of one of the most popular shows on TV. The book will delight with its warmth, depth and wonderful sense of joie de vivre.

Bruno Tonioli was born in Ferrara in northern Italy in 1955. He begun his professional career as a dancer and came to London as a leading member of the Paris-based company La Grande Eugene before joining the Lyndsay Kemp Company. He has worked extensively in film, theatre and TV - and also in the music business, choreographing videos, stage shows and tours for many artists including Tina Turner, Sting, Elton John, the Rolling Stones, Freddy Mercury, Boy George and Duran Duran. His TV credits include Not the Nine O'Clock News, Absolutely Fabulous, French & Saunders, The Brit Awards, Top of the Pops and The Royal Variety Show. Since 2004, Bruno has been a judge on BBC1's smash show Strictly Come Dancing; since 2005 he has also been a judge on ABC's equally successful show Dancing With the Stars in the USA. He lives in London and Los Angeles.

GOR010520810
9780755364077
0755364074
Bruno My Story by Bruno Tonioli
Bruno Tonioli
Used - Like New
Hardback
Headline Publishing Group
2012-09-13
304
N/A
Book picture is for illustrative purposes only, actual binding, cover or edition may vary.
The book has been read, but looks new. The book cover has no visible wear, and the dust jacket is included if applicable. No missing or damaged pages, no tears, possible very minimal creasing, no underlining or highlighting of text, and no writing in the margins
Trustpilot