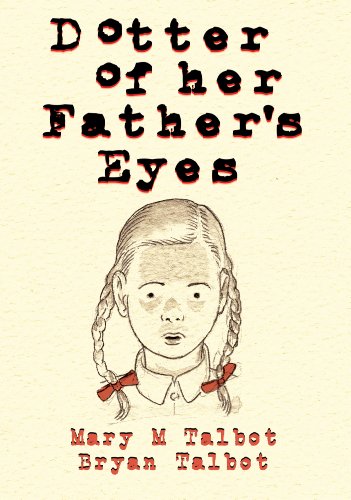 Dotter of Her Father's Eyes
by Bryan Talbot

In Stock
£2.39
Part personal history, part biography, Dotter of Her Father's Eyes contrasts two coming-of-age narratives: that of Lucia, the daughter of James Joyce, and that of author Mary Talbot, daughter of the eminent Joycean scholar James S.
Very Good Good
11 in stock

Dotter of Her Father's Eyes Summary

Dotter of Her Father's Eyes by Bryan Talbot

Part personal history, part biography, Dotter of Her Father's Eyes contrasts two coming-of-age narratives: that of Lucia, the daughter of James Joyce, and that of author Mary Talbot, daughter of the eminent Joycean scholar James S. Atherton. Social expectations and gender politics, thwarted ambitions and personal tragedy are played out against two contrasting historical backgrounds, poignantly evoked by the atmospheric visual storytelling of award winning comic artist and graphic novel pioneer Bryan Talbot. Produced through an intense collaboration seldom seen between writers and artists, Dotter of Her Father's Eyes is intelligent, funny and sad - a fine addition to the evolving genre of graphic memoir.

Dotter of Her Father's Eyes Reviews

"Dotter of Her Father's Eyes is doubly enjoyable for writer Mary Talbot's masterful interweaving of two father-daughter relationships and cartoonist Bryan Talbot's equally brilliant drawings, which transported me back-and-forth between gritty postwar Britain and the swinging Paris of the 20s and 30s. This is one of the best collaborative efforts I've seen in the comics medium." -- Joe Sacco
"A fascinating and original book, which will have wide appeal - not just to fathers and daughters!" -- Jennifer Coates
"[Am]bitious, entertaining and perceptive...blends a first-time script from Mary Talbot with stunning drawings and design from her husband, Bryan... It's a small triumph." -- Tim Martin * Daily Telegraph *
"Elegantly drawn and fluidly told, like Alison Bechdel's graphic memoir, Fun Home, this is a moving take on fathers, daughters and literature." -- Tom Gatti * The Times *
"Lucia Joyce's tragic descent from creativity into fragmentation is brilliantly brought home by the writing and art of the Talbot team." -- Lucille Redmond * Irish Times *

Mary Talbot is an internationally acclaimed scholar who has published widely on language, gender and power, particularly in relation to media and consumer culture. Her recent books include Language and Gender (2nd edition) and Media Discourse: Representation and Interaction, though she continues to be best known for her critical investigation of the 'synthetic sisterhood' offered by teen magazines. Dr Talbot has worked in higher education for over twenty-five years and Dotter of Her Father's Eyes is the first work she has undertaken in the graphic novel format. She is currently scripting a historical graphic novel. Bryan Talbot has worked on underground comics, science fiction and superhero stories such as Judge Dredd and Batman: Legends of the Dark Knight, Vertigo titles include Hellblazer, Sandman and Fables and has written and drawn several Eisner Award-winning graphic novels. In 2009 he was awarded a Doctorate in Arts. He is currently drawing Grandville Bete Noire, the third volume in his series of steampunk detective thrillers.

GOR004422293
Dotter of Her Father's Eyes by Bryan Talbot
Bryan Talbot
Used - Very Good
Hardback
Vintage Publishing
2012-02-02
96
0224096087
9780224096089
Winner of Costa Biography Award 2013 (UK)
Book picture is for illustrative purposes only, actual binding, cover or edition may vary.
This is a used book - there is no escaping the fact it has been read by someone else and it will show signs of wear and previous use. Overall we expect it to be in very good condition, but if you are not entirely satisfied please get in touch with us.