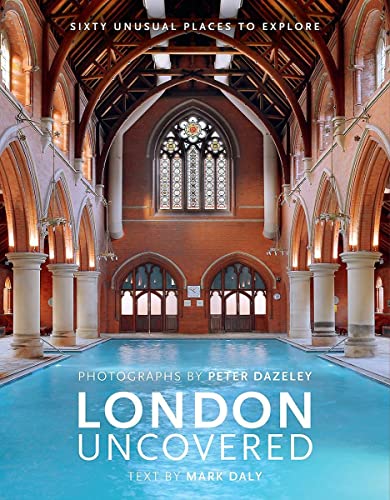 This new edition of London Uncovered opens the doors to sixty of the capital's most intriguing places, all visitable but not widely known.

A follow-up to the hugely successful Unseen London, London Uncovered is a unique London guidebook that opens the doors to more than sixty of the capital's most intriguing places, all visitable but not widely known.

From museums of the unusual to places of worship; palaces of entertainment to historic and ornate shops; city houses and hostelries, take a trip through the capital's hidden treasure and discover a picture of a London which is strange, gaudy, grand and inventive.

Describing the history and the character of each place, the book uncovers a wealth of stories about an endlessly fascinating world city with its own unique character. This fresh edition includes over a dozen new locations, including the Dennis Severs House, Les Ambassadeurs Casino and Sir John Soane's Museum.

See a glimpse of uncovered London with this unique guide to the city's buildings.

'A thrilling tour behind the closed doors of the capital city's buildings.' Daily Telegraph

'Dazeley captures the atmosphere of each building to perfection.' Daily Express

About By (photographer) Peter Dazeley

Peter Dazeley FRPS, known as Dazeley, is a celebrated London photographer renowned for fine art and advertising photography. He was born in West Kensington and studied photography at Holland Park School, now known as the Socialist Eton. Being dyslexic he left school at 15 without any formal qualifications. He feels his dyslexia is an asset because it gives him the ability to look at problems and objectives from a different point of view; he is a meticulous planner and imaginative problem solver. "Making the ordinary look extraordinary is Dazeley's gift," says Sarah Ryder Richardson, who represents Dazeley in the UK.

His work has won many awards from organisations across the world, including the Association of Photographers and the Royal Photographic Society in the UK, EPICA in France, Applied Arts Magazine in Canada, and Graphis Inc. in the USA . Dazeley is one of the few modern photographers whose fine art work is produced as platinum prints and is currently working on several fine art projects out of his own studio complex in Chelsea, London.

Dazeley became a member of the Association of Photographers in 1977 and became a life member in 1984. In June 2013 he was awarded a Fellowship by the Royal Photographic Society. Fellowship is the highest distinction of the RPS and recognizes original work and outstanding ability. He is married and has a daughter and a son; they live in Coombe Hill, Surrey.

Mark Daly is a writer and publisher with a longstanding interest in secret and little-known aspects of London. He has also devised a number of walking tours of unseen London. He lives in South Nutfield, Surrey.

NGR9780711239982
London Uncovered (New Edition): More than Sixty Unusual Places to Explore by By (photographer) Peter Dazeley
By (photographer) Peter Dazeley
New
Hardback
White Lion Publishing
2018-09-26
272
0711239983
9780711239982
N/A
Book picture is for illustrative purposes only, actual binding, cover or edition may vary.
This is a new book - be the first to read this copy. With untouched pages and a perfect binding, your brand new copy is ready to be opened for the first time.